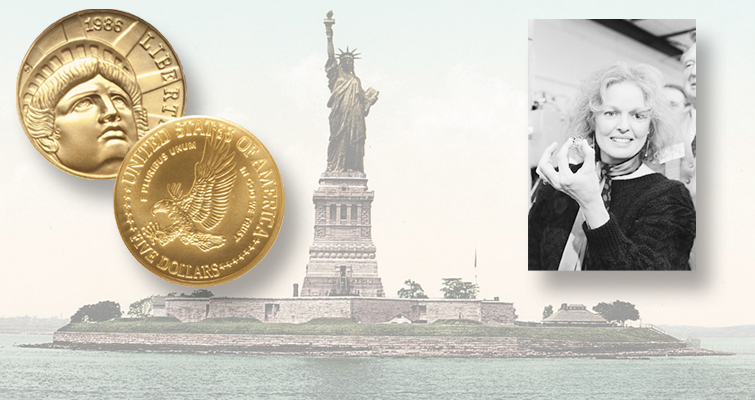 Designer of the 1986 Statue of Liberty gold $5 coin, Elizabeth Jones shows the one she struck on Oct. 18, 1985, during a first-strike ceremony at the West Point Bullion Depository.

The coin collecting community was stunned when both Uncircu­lated and Proof versions of the 1986 Statue of Liberty gold $5 commemorative coin were de­clared perfect and assigned the grade 70 in July 1986.

While most of the attention centered on the revolution underway in grading, it was evident that more factors than grading were at play.

Grading professionals and seasoned numismatists pointed to the balance in obverse and reverse design elements as the primary factor leading to the perfect coin. That achievement was singly attributable to the knowledge and expertise of the coin’s designer and sculptor, Chief Sculptor-Engraver Elizabeth Jones, appointed by President Reagan in 1981.

Her first two U.S. coin designs — the 1982 George Washington commemorative half dollar and the 1983 Olympic dollar — won international design awards. But her stunning Statue of Liberty gold $5 coin’s achievement in technical perfection proved her sculpturing abilities as well as her leadership in introducing new techniques to the U.S. Mint staff.

Quality of the coin blanks was the third and often overlooked factor in creating the perfect coin.

When the United States Mint resumed striking commemorative coins in 1982, the Mint had no refineries or ability to manufacture silver and gold blanks. The Mint had ended production of circulating gold coins in 1933. Silver coin production ceased in mid-1965 when the Mint converted to clad coinage in compliance with the Coinage Act of 1965.

Legislation authorizing the modern commemorative coins specified that the dollar and $5 half eagle be made of precious metals — silver and gold. With no refineries or precious metals blanking operations and no lead-time for startup, the U.S. Mint was forced to turn to the private sector to purchase blanks needed for the various programs. The ability to seek competitive bids from the private sector and to require precise specifications provided the U.S. Mint with greater quality control, in both manufacturing and delivery to its various minting facilities.

The fourth factor was the “white-gloves” treatment in coin production. Keenly aware that its coins would have to compete in the marketplace with those produced by other world Mints, the U.S. Mint instituted individualization in the coining room. Each planchet was placed by hand individually on the coining press, struck at least two to three times, removed and individually packaged by hand in the various presentation boxes. 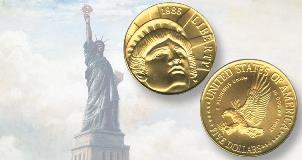 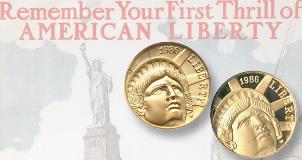