Starting with a lot to learn 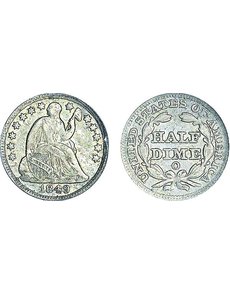 Missing in action in August 1955 was the writer’s scarce 1849-O Seated Liberty half dime, similar to this example, but in lower grade. Coin is shown at more than twice the actual 15.5-millimeter diameter of an actual coin.

I continue my reminiscences of my first American Numismatic Association convention. The time was August 1955, and at age 17 I was not yet old enough to be a member of the ANA (18 was the requirement).

However, the association had 40 bourse tables to sell at $50 each and some were not spoken for.

I had been a dealer since 1953 and had attended a number of shows in the East, but this prospect would be my first long-distance trip — to Omaha, Neb.

The ANA awarded me a table with the provision that my father be responsible for the integrity of my transactions. Minors were viewed with a wary eye. Quite a change, I must say, from now. Youngsters are welcome and the Young Numismatists group within the association has special programs and is very much appreciated — as the future of the hobby.

The bourse was in the Grand Ballroom of the Sheraton-Fontenelle Hotel. Dealer tables were placed all around the walls, and in the center were tables for educational displays. A kindly old gentleman, O.L. Harvey, from Seminole, Okla., had a complete set of four 1879 and 1880 $4 gold Stellas on view. I had never seen such before, so he let me examine them.

Among the coins I had for sale was an 1849-O Seated Liberty half dime, a worn example of this rare date and Mint. A man came over to look at it, while I was talking to someone else. When I returned my attention, he had departed, as had the half dime. The dealer having the bourse table next to me, Charlie, a railroader who dealt in coins part time (and who wore the same tie, with a stain on it, each day at the show), told me that he knew the culprit, a well-known shoplifter, but there wasn’t much that I could do about it as he needed to be caught in the act.

I learned that others around the bourse were quite aware of him.

Proof sets were all the rage in 1955, and at the convention Sol Kaplan posted a list of bid and ask prices for modern sets from 1936 to date, changing certain values during the show. This created quite a stir, and at later conventions he set up a large chalkboard to do this. At the convention I saw three complete 1915-S Panama-Pacific International Exposition sets for sale, which was amazing. The “rare” was common, it seemed. I still had a lot to learn.