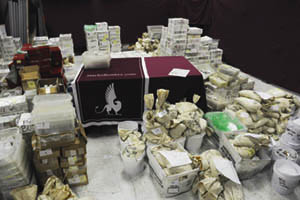 Boxes and bags are full of the U.S. coins included in The Stack’s West 57th Street Collection.

Stack’s Bowers Galleries has acquired a hoard containing more than 1 million coins ranging from bags of large copper cents and Capped Bust half dollars, to Morgan and other silver dollars.

The hoard has been designated The Stack’s West 57th Street Collection as the coins were obtained in New York City and around the country, then stashed away and never reviewed for key dates or attributed by varieties, according to the firm.

The hoard was transferred to the firm’s offices in California, and armed guards kept watch as the 30-ton hoard was unloaded from two large transport trucks and transferred into secured vaults.

According to the firm, the sorting process has now just begun, and announcements of collection highlights will be made in upcoming months as the hoard is examined.

Stack’s Bowers estimates the market value to be well into eight figures, with initial estimates ranging from $15 million to $20 million.

Most of the coins, including Washington quarter dollars, Franklin half dollars, bags of Flying Eagle and Indian Head cents, and nearly 10,000 1909 Lincoln, V.D.B. cents, are in circulated grades, “and will appeal to collectors seeking coins that are both historical and affordable,” according to the firm.

“Going through samples from this collection has been amazing,” said Lawrence R. Stack, a founder of Stack’s Bowers Galleries. “Each of the thousands of groupings has remained sealed as originally closed by the owner. We expect to find many rare varieties and discoveries as the review process continues. I have never seen anything like it, and am unaware of any comparable hoard of copper, nickel and silver coins that has ever come to the numismatic market.”

For more information about the Stack’s Bowers Galleries hoard, visit the company’s website at www.stacksbowers.com.