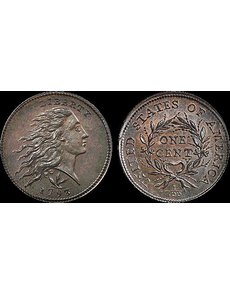 One of the most impressive coins was this 1793 Flowing Hair, Wreath cent graded Mint State 69. The nearly-prefect MS-69 example brought $481,750.

Stack’s Bowers Galleries offered nearly 12,000 lots as part of its various auctions held in conjunction with the American Numismatic Association World’s Fair of Money in Rosemont, Ill., Aug. 11 to 20.

Here are some of the highlights from the 18 sessions (including online sessions) that took place.

The Aug. 15 Rarities portion of the sale included several coins of low grade but of great rarity that brought strong prices.

A 1792 Silver Center cent pattern, one of fewer than a dozen known, was graded by Professional Coin Grading Service as Fine Details, Environmental Damage.

Q. David Bowers provided some personal comments on the coin, which he sold in 1961 “in connection with the unique pattern collection formed by Major Lenox R. Lohr,” addressing huge changes in the marketplace for patterns since then.

“Patterns were so specialized [in 1961] that there was no point in running display advertisements,” he wrote. Today, the market and research on patterns has expanded considerably, and the coin sold for $70,500.

The Silver Center cent patterns are documented in a Dec. 18, 1792, letter from Thomas Jefferson to George Washington where the silver center is described as “a silver plug worth ¾ of a cent into a copper worth ¼ cent.” The plug concept was not adopted for copper coinage and these rare pieces are now nostalgic reminders of the innovations inherent in the earliest days of the U.S. Mint.

The Rarities Night session also offered some magnificent condition rarities. Perhaps most noteworthy was the reappearance of a 1793 Flowing Hair, Wreath, Vine and Bars Edge cent, graded Mint State 69 by PCGS that brought $481,750. It was recently offered in January at Stack’s Bowers’ Americana sale where it brought $558,125. To put its grade into perspective, it is currently the only large cent to have received an MS-69 grade from any major certification service and is the only 18th century U.S. coin certified as MS-69.

The catalog’s description adds a speculative note, stating, “it is in an ‘old green [PCGS] holder,’ suggesting for any other coin that perhaps if reholdered a higher grade could be obtained. Wait a minute! Perhaps it would be applicable to this coin also — absolute perfection. Who knows? We do know, however, that here is a coin for the ages, the sale of which will forever echo in the halls of numismatics.”

Another well-studied top-end piece is a pattern 1792 half disme graded PCGS MS-66, with a provenance that included the family of U.S. Mint Director David Rittenhouse. It realized $793,125 and was previously used as the plate coin for the type in both standard references A Guide Book of United States Coins and Dr. J. Hewitt Judd’s book United States Pattern Coins.

Among the more unusual lots was a “dateless” 1797 Draped Bust, 16 Stars dime graded PCGS Fine 15. As the catalog describes, all of the coins from this obverse die have a weak date since the die broke when the initial coin was struck. This piece represents the terminal die state where the date is practically obliterated by a cud so that just a shadow of the base of the 79 in the date can be seen.

It’s one of the most dramatic die failures in all early U.S. coins and, in this die state, is one of just five or 10 examples known, per the catalog. It brought $7,050.

Finally, a 1794 Flowing Hair dollar with a lengthy ownership history that traced back to the 19th century found a new home at $211,500. The finest known example of the issue, graded Specimen 66 by PCGS with a green Certified Acceptance Corp. sticker, generated headlines earlier this year when it realized more than $10 million at auction.

Among the named collections in the sale was the Richard Jewell Collection of Seated Liberty half dollars. Leading the group was the key to the series: an 1878-S Seated Liberty dollar graded MS-63 by PCGS with a green CAC sticker that sold for $164,500. Just 12,000 were struck, and today around 50 are known.

When B. Max Mehl offered it as part of his June 1946 sale of the William Cutler Atwater Collection he considered it a Proof. Although that opinion has not stood the test of time, the coin likely holds a position as one of the top 10 known for the date.

An 1889-CC Morgan dollar graded PCGS MS-68 that sold for $881,250 — the top lot in the various Stack’s Bowers ANA sales — took some attention off of another spectacular Morgan silver dollar.

An 1893-CC Morgan dollar graded Proof 66 Cameo by Numismatic Guaranty Corp., which the catalog speculates is one of around a dozen known today, brought $323,125, further confirming the market’s current taste for exceptional Branch Mint Proof Morgan dollars. The description adds, “A sharp strike to the devices and fully denticulated borders further confirm the extra care with which this coin was struck. Both sides are also beautifully toned in vivid orange-russet with a deeper frame of blue around the rims.”

The buyer must have not disagreed with the catalog’s statement: “It is difficult to imagine anything less than complete satisfaction coming from ownership of this piece, as it has everything going for it. A great pedigree, great aesthetics, finest graded status and a rare date.”

Last time at auction, it was offered by Heritage as part of the Kutasi Collection in January 2007, where it realized $402,500.

Numerous high-powered errors appeared in the auctions including a 1909 Indian Head cent overstruck on a 1906 Barber dime. Two full dates are visible and the lot description called NGC’s MS-65 grade conservative. It brought $42,594 and is listed as number 20 in the book 100 Greatest U.S. Error Coins. The description states that just one other example of this error combination is known: an 1899 Indian Head cent overstruck on an 1899 Barber dime.

One of the more “mainstream” striking errors in the sale was a 1944 Lincoln cent struck on a zinc-coated steel cent planchet of the type used for 1943 cents and Belgian 1944 2-franc coins. The description states that fewer than 30 1944 Philadelphia Mint steel cents are known and the PCGS MS-64 example with a green Certified Acceptance Corp sticker — among the finest known — brought $158,625.

Compared to the steady interest in off-metal 1943 cents on copper planchets and 1944 cents on zinc-coated steel cents, off-metal Jefferson 5-cent pieces of 1943 have been relatively understudied. A 1943-S Jefferson 5-cent piece struck on a zinc-coated steel planchet and graded MS-65 brought $9,400. When articulating its broad desirability, the catalog noted that it is a “dramatic and rare error coin that has it all, featuring perhaps the very best 20th century date for such an error, the Gem grade, and as a further bonus, struck at the San Francisco Mint.” ¦