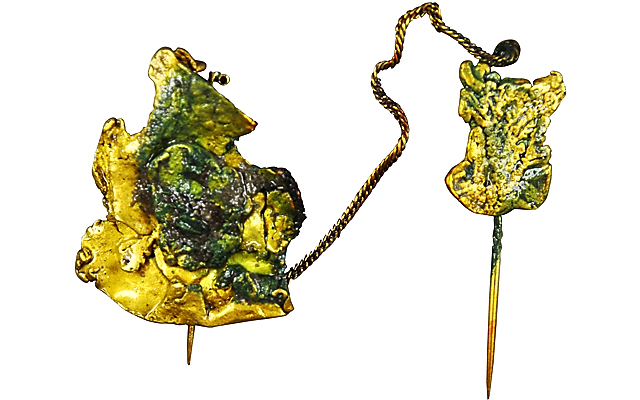 Among the most recent finds from Remotely Operated Vehicle dives on the site of the shipwrecked SS Central America is this piece of jewelry fashioned from large gold nuggets.

Salvage operations off the coast of South Carolina continue by Odyssey Marine Exploration in recovering gold and silver coins, gold nuggets and dust, and other artifacts from the 1857 wreck site of the SS Central America.

The vessel sank off the coast of South Carolina on Sept. 12, 1857, during a hurricane.

The latest report filed Aug. 25 by Odyssey in U.S. District Court for the Eastern District of Virginia in Norfolk covers the period July 16 through Aug. 15. The report was filed on behalf of Recovery Limited Partnership LLC.

Items salvaged during the 14 Remotely Operated Vehicle dives brings the total treasure recovered and identified by Odyssey since April to more than 3,000 United States and foreign gold coins, more than 12,000 silver coins, plus gold nuggets and dust. The ROV has also recovered numerous gold jewelry pieces, clumps of coins and various unattributed coins.

The latest log of items recovered lists the following:

??61 pieces of gold jewelry, many crafted from large gold nuggets.

The wreck was identified in 1987 and recovery operations took place from 1988 to 1991 by the original salvors, Columbus-America Discovery Group.

On March 3, 2014, Odyssey announced that it was awarded an exclusive contract to return to the site for further excavation.

Recovery Limited Partnership is the court-appointed salvor-in-possession of the shipwreck.

Complete details for the report filed by Odyssey with the federal court in Norfolk on Aug. 25, as well as the previous three operational reports and four inventory reports, can be found online here.