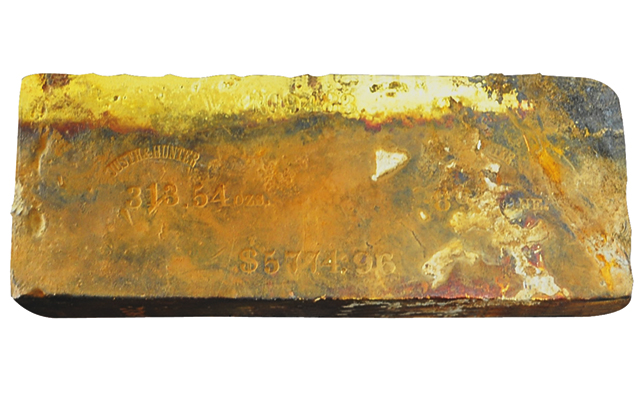 Justh & Hunter, a 19th century assaying firm that had locations in San Francisco and Marysville, stamped this bar twice with the company’s hallmark, as well as the bar’s technical specifications. 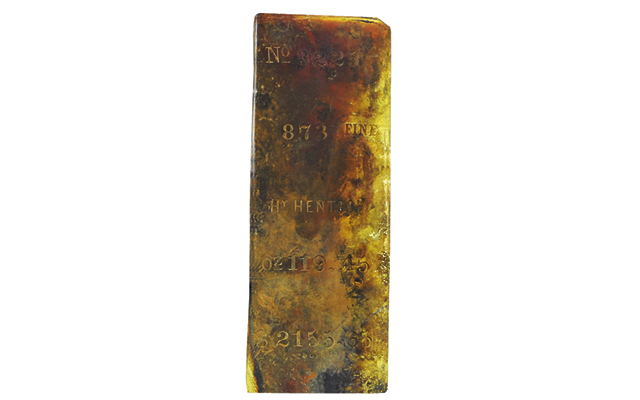 Swiss-born Henry Hentsch, maker of this gold bar, began his assaying operations soon after arriving in San Francisco on May 31, 1854. Hentsch’s firm eventually evolved into the San Francisco branch of the Swiss-American Bank. 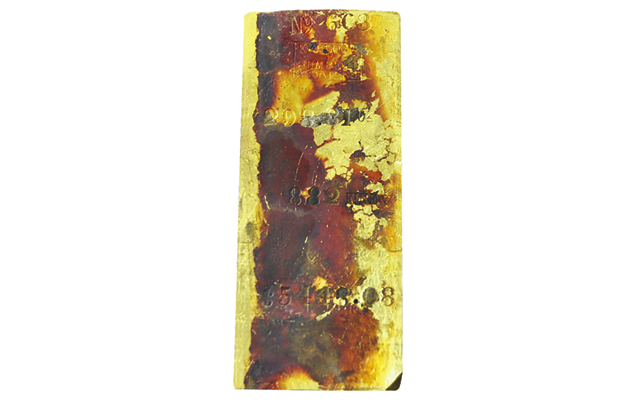 The largest of the three Kellogg & Humbert, Assayers, gold bars recovered April 15 is stamped with a weight of 298.81 ounces and a fineness of .882. 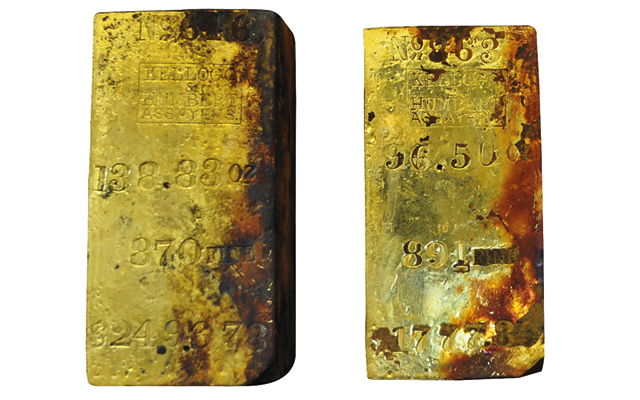 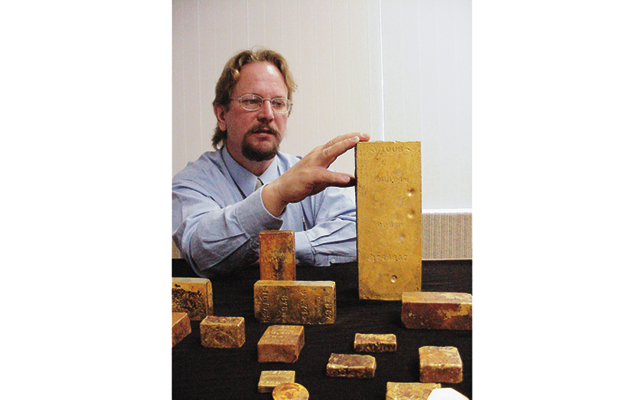 Bob Evans is shown more than 20 years ago with the “Eureka bar,” an 80-pound gold ingot that remains the largest such piece recovered from the wreckage of the SS Central America. 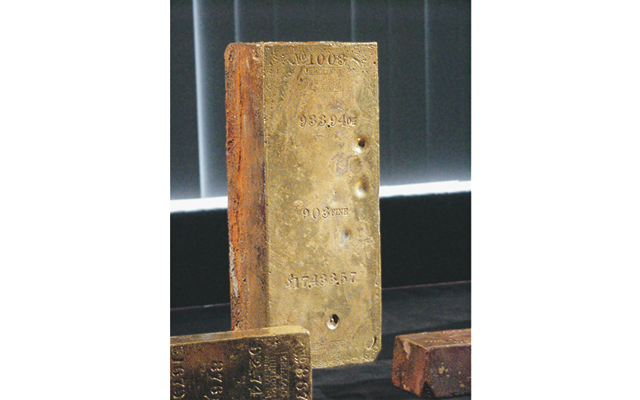 An anonymous investor purchased the "Eureka" bar for $8 million in 2001.

After remaining undisturbed for more than 20 years, the site of the 1857 shipwreck SS Central America off the Carolina coast is starting to yield gold treasure once again.

The gold melt value alone for the recovered items totals more than $1.2 million. The market value is likely going to be many multiples of that figure, based on prices received for similar items previously salvaged and sold into the collector market.

Some ingots recovered in the earlier salvage operations, by Columbus-America Discovery Group between 1988 and 1991, have individually sold in the hundreds of thousands of dollars.

Adam Crum, vice president at Monaco Rare Coins in Newport Beach, Calif., said May 7 that he is thrilled at the opportunities that await marketing any of the new treasure recovered by Odyssey Exploration from the wreck site.

“I wish I had some bars to sell,” Crum said.

Monaco, starting in the early 2000s, conducted extensive marketing in selling some of the bars and coins that were recovered from the wreck site between 1988 and 1991.

Crum confirmed Monaco has bought and sold many of the gold bars more than once since they first became available for sale.

Odyssey conducted the preliminary reconnaissance in April as part of its court-ordered contract.

Odyssey was selected for the project by Ira Owen Kane, who was appointed in May 2013 in Franklin County Common Pleas Court in Columbus, Ohio, as the receiver for Recovery Limited Partnership (RLP) and Columbus Exploration LLC. As receiver, Kane is supervising the resumption of recovery operations.

Just how much treasure remains to be recovered, and in what form, is yet to be determined, but it could be worth in the tens to hundreds of millions of dollars, according to some experts.

Under its current contract, Odyssey will conduct and underwrite the archaeological excavation, cargo recovery and shipboard conservation on behalf of Recovery Limited Partnership. In return, Odyssey is to receive 80 percent of recovered proceeds until a fixed mobilization fee and negotiated day rate is paid. Thereafter, Odyssey will receive 45 percent of the recovery proceeds, according to Odyssey officials.

The two-hour reconnaissance dive April 15 was conducted during the transit of Odyssey’s research vessel, the Odyssey Explorer, from the United Kingdom to Charleston, S.C., to mobilize for the project.

Evans previously served as chief scientist, historian and later as curator for Columbus-America’s SS Central America recovery operations of 1988 to 1991.

During the April 15, 2014, dive, Odyssey’s remotely operated vehicle ZEUS traveled over the shipwreck to assess the current condition of the site, according to Odyssey officials.

Evans said, “This dive confirms for me that the site has not been disturbed since 1991, when I was last there.”

Gold ingots and other artifacts were clearly visible on the surface of the site during the dive and no excavation was required for their removal. In addition to the two coins and five gold bars, also salvaged were a bottle, a piece of pottery, a sample of the shipwreck’s wooden structure, and an element of a scientific experiment that was left at the site more than 20 years ago.

Four of the bars are stamped vertically with — not necessarily in the same order — a serial number, the assaying firm’s hallmark, gold fineness, weight in gold, and the value of the bar in gold at the time of stamping.

One of the five bars has the details stamped and oriented horizontally.

Three of the bars are stamped by Kellogg & Humbert, Assayers, a San Francisco firm:

Augustus Humbert was appointed United States Assayer of Gold in San Francisco. Humbert joined Kellogg in the firm of Kellogg & Humbert in April 1855. The firm operated in San Francisco as an assaying and coining concern.

When the San Francisco Mint was first established in April 1854, production was hampered by shortages of alloy and parting acids. The facility was not able to satisfy the need for coinage.

Kellogg & Humbert helped offset the shortfall, primarily by issuing gold $20 coins until the end of 1855, when the federal Branch Mint was fully operational.

Kellogg and Humbert dissolved their partnership in 1860.

The Swiss-born Hentsch began his assaying operations soon after arriving in San Francisco on May 31, 1854. His firm eventually evolved into the San Francisco branch of the Swiss-American Bank.

Also represented by only one bar is the assaying firm of Justh & Hunter, which had locations in San Francisco and Marysville.

The firm’s newly recovered bar is stamped twice with the company’s hallmark. Other details are the serial number, No. 9483; weight, 313.54 ounces; fineness, 89X (the final digit is obscured by encrustation); value, $5774.96.

All of the stamped details are punched in horizontally on the rectangular Justh & Hunter bar.

Emil Justh, a lithographer in his native Hungary, arrived in San Francisco on Nov. 15, 1850, settling up a short-lived business that included lithography before joining local assaying operations.

Justh partnered in 1855 with Solomon Hillen Hunter for the purpose of assaying gold.

Prior to boarding the steamship Sonora in 1855 bound for San Francisco from the west side of Panama, Hunter had been a passenger aboard the SS George Law, a previous name of the SS Central America.

More than 80 Justh & Hunter bars were previously recovered from the shipwreck site.

All of the details from the bars recovered April 15, 2014, were ascertained from color images Odyssey provided to news media outlets in conjunction with its announcement of the preliminary shipwreck site reconnaissance and items recovered.

Odyssey officials declined to provide additional details now on the two double eagles or the ingots, nor additional close-up photos of the recovered items.

“We are working under contract for the Receiver of RLP, Ira Kane,” Liz Shows, manager of corporate communications for Odyssey Marine Exploration Inc., told Coin World by email May 6. “When we are approved by the Receiver to release additional information on the bars, I will let you know.

“We are still in the early stages of this project as the pre-disturbance work hasn’t even been completed yet. I agree that this story would be a great fit for your publication and your readers are the audience we’d like to reach. Once we are able to provide more information, we would be happy to work with you on a detailed story about the recovered coins and bars.”

The SS Central America was lost when it was caught in a hurricane and on Sept. 12, 1857, sank 160 miles off the coast of South Carolina. Its cargo included a large consignment of gold, including thousands of freshly minted double eagles and gold bars.

The Columbus-America Discovery Group LLC, acting as agent for Recovery Limited Partnership, confirmed the location of the SS Central America shipwreck site in September 1988 at a depth of 7,200 feet.

A large quantity of commercial gold was recovered from a portion of the shipwreck site during more than 1,000 hours of bottom time, according to Odyssey officials, with large sections of the site unsearched.

Columbus-America Discovery Group, as agent for RLP, initiated an admiralty action in the United States District Court of the Eastern District of Virginia to establish ownership of the shipwreck and all of its contents.

After more than a decade of litigation, the court ruled that Columbus-America owned 92.4 percent of the recovered gold. The remainder was awarded to the surviving companies that insured the ship’s cargo in 1857.

Manley, as managing partner of California Gold Marketing Group LLC, engineered the acquisition of Columbus-America’s share in a transaction between late 1999 and early 2000 that totaled more than $100 million.

The largest of the gold bars recovered to date and the single most valuable piece from SS Central America’s treasure is the 80-pound assay ingot dubbed the “Eureka bar.”

In November 2001, it was announced that an anonymous multimillionaire paid $8 million to acquire the largest assay ingot salvaged — the 933.94-ounce ingot produced by the San Francisco assaying concern of Kellogg & Humbert.