SS Central America in the marketplace 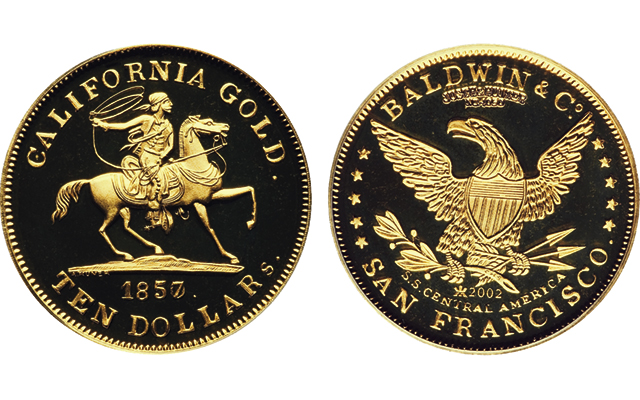 The design of an 1850 Baldwin & Co. “Horseman” territorial $10 gold issue inspired these 2002 restrikes carrying the date “1857/0.” The bullion came from an ingot recovered from the SS Central America. The restrike brought $940 at Heritage’s March 20 auction of the Bently Collection.

Collectors looking for a piece of the SS Central America treasure have a few options depending on their budgets.

The most expensive pieces are the large-size gold ingots recovered from the shipwreck. An ingot is a broad term, but generally refers to a bar or block that has been cast in a standard shape for convenient storage and shipment.

During the early days of the Gold Rush in the 1850s, very small ingots or gold bars circulated alongside coinage. The start of production of gold coins at the San Francisco Mint in 1854 alleviated some of the shortage of coin, but bars continued to be produced. For example, the Kellogg & Humbert firm was organized in April 1855 and a 91.73-ounce bar carrying the KELLOGG & HUMBERT ASSAYERS rectangular stamp brought $258,500 at an April 24, 2014, Heritage auction. A different bar from the same firm weighing 36.40 ounces brought $176,250 at a Feb. 4 Heritage sale.

When it comes to gold bars, size matters.

Among the coins, the essential SS Central America gold coin is an 1857-S Coronet $20 double eagle. 1857 marked the third full year of operations at the new San Francisco Mint and, although nearly a million 1857-S double eagles were produced, until the discovery nice Mint State examples were infrequently found. The ship contained over 5,200 examples of the issue. One graded Mint State 67 brought $138,000 at a 2012 Heritage auction. Other, more typical examples of the date from the treasure sell at more modest (but still expensive) price levels such as an NGC MS-62 coin that sold for just under $6,000 at an April 25 Heritage auction and multiple MS-64 PCGS examples have realized prices in the $9,400 to $10,000 range in recent auctions.

Also collectible are relic restrikes made from gold recovered from the wreck. In 2002, Proof restrikes of the Baldwin & Co. $10 coin of the Horseman type were made from gold recovered from a Justh & Hunger ingot that had been on the shipwreck. These carry a date of 1857/0 on the obverse and 2002 on the reverse. In 2013, one graded Deep Cameo Proof — these typically don’t have standard 1 to 70 number grades when certified — brought $705 at auction.

More dramatic are the replica 2.5-ounce 1855 Kellogg & Co. $50 gold pieces that were struck from Kellogg & Co. ingots recovered from the wreck. These were produced in 2001 and are individually dated on the reverse with the specific date of production. They’re often collected with their original, ornate packaging that included a copper-and-glass frame. Both Mint State and Proof finish examples were produced and today these trade at the $4,500 to $5,000 level with premiums paid for examples with original packaging.