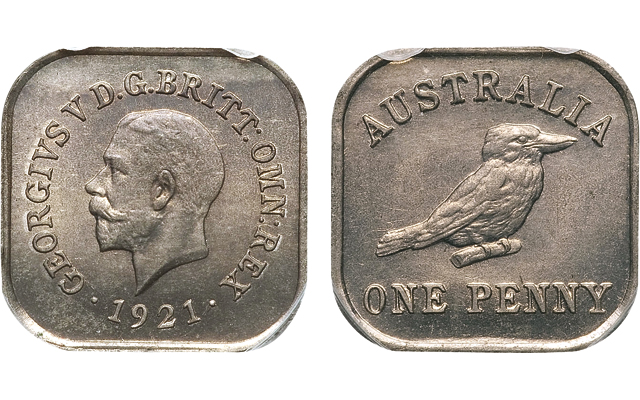 Though this is one of the most common of the 1921 Kookaburra penny patterns, this example is the finest graded, designated Specimen 65 by Professional Coin Grading Service. Prongs from the grading service holder are slightly visible in this image. 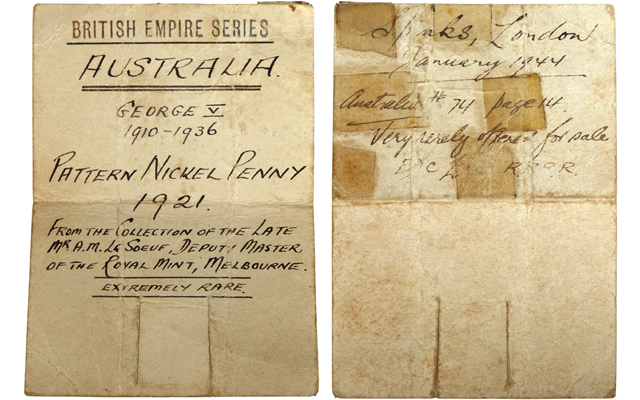 The original envelope from Spink’s 1944 sale of the coin accompanies the pattern. 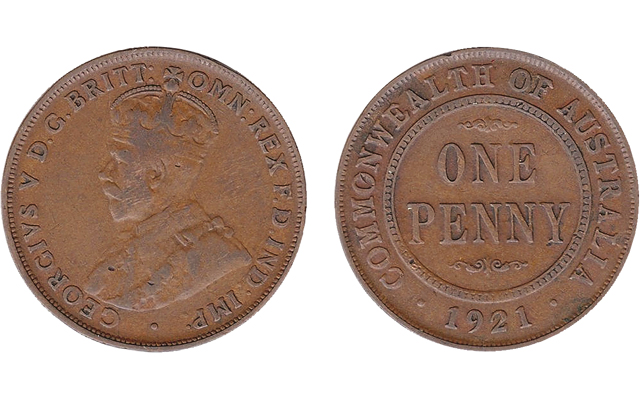 The square penny would have replaced the larger, round bronze coins then in circulation, like this example from the same year as the pattern, 1921.

Decades before the kookaburra debuted on Australia’s 1-ounce silver coin, the laughing bird was selected for the reverse of new halfpenny and penny coins.

Though dozens of samples of various designs were issued for examination by authorities, the square-shaped coin was rejected for general circulation for several reasons. One of most common of those patterns, designated Renniks Type 12 by collectors, highlights Heritage Auctions’ Sept. 3 to 5 Long Beach World & Ancient Coins Signature Auction.

While it represents the most common design type, the coin in the Heritage auction is reportedly the single finest 1921 Kookaburra penny pattern certified at either Professional Coin Grading Service or Numismatic Guaranty Corp.

PCGS designated the coin Specimen 65, and the auction house describes the coin as “fully lustrous” and exhibiting “superb eye appeal” despite a few minor marks.

Matching its condition is the provenance, which traces to the collection of the late deputy master of the Melbourne Mint from 1921 to 1925, Albert Malet Le Souef. The original Spink envelope, from when the coin was sold in 1944, accompanies the coin.

Le Souef was the top man at the mint for the final year of the penny and halfpenny pattern saga.

Beginning in 1919 and continuing to 1921, several hundred halfpenny and penny patterns were struck, featuring 23 different minor types or subtypes, with 21 of those types found among the pennies. All but three pattern types were struck in a copper-nickel alloy, with the remainder being of a nickel-silver alloy. The example in this sale is made of copper-nickel.

Variations in the length of the branch, the size of the kookaburra and the placement of the denomination legend distinguish the 23 subtypes.

The patterns were meant to test whether the Australian government could replace large bronze halfpennies and pennies with smaller, lighter examples.

Patterns were distributed to Treasury officials, members of Parliament and others to gauge their reaction.

Production for circulation was not adopted because the square coins would require costly modifications to vending machines. Other factors were the difficulty in importing nickel and striking the metal, which is very hard in its unalloyed form. A change in government officials also seems to have been a factor.

Most examples of the patterns (including the example in the Heritage sale) were struck at the Melbourne Mint.

Another unifying trait of most of the penny patterns is the bare-headed portrait of King George V, facing a viewer’s left. A bare-headed effigy of the king by Sir Bertram MacKennal appears on the obverse of the Type 12 pattern offered by Heritage.

The design that any new pattern would have replaced was of a crowned portrait of George V.