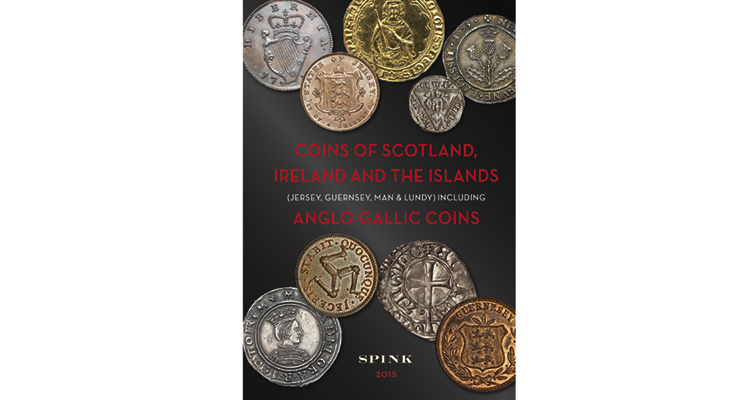 Spink has published the third edition of a standard reference book about coins of Scotland, Ireland and the British Isles.

The third edition of the catalog Coins of Scotland, Ireland, the Islands and Anglo-Gallic Coinage is being published by Spink.

The new edition is scheduled for release in September; publisher Spink began accepting pre-orders for the book earlier this summer.

Spink also refers to the book as its Standard Catalogue, Vol. 2. This book is a companion volume to the best-selling annual catalog titled Coins of England, which is also known as the Standard Catalogue of British Coins.

Now running to 320 pages in hardback, the catalog of coins from Scotland and Ireland is considered by collectors in the field the essential guide for these coins.

The last edition was published in 2003; the 2015 edition features updated market values in multiple grades for all coins, according to the publisher.

The new edition features a completely new section for the Anglo-Gallic coins, those coins struck in France by the kings and princes of England between 1154 and 1453. It also features full color actual size illustrations for the first time.

The book is published by Spink for $65, including delivery to U.S. addresses.

To order from Spink’s book department, visit its website, www.spinkbooks.com.