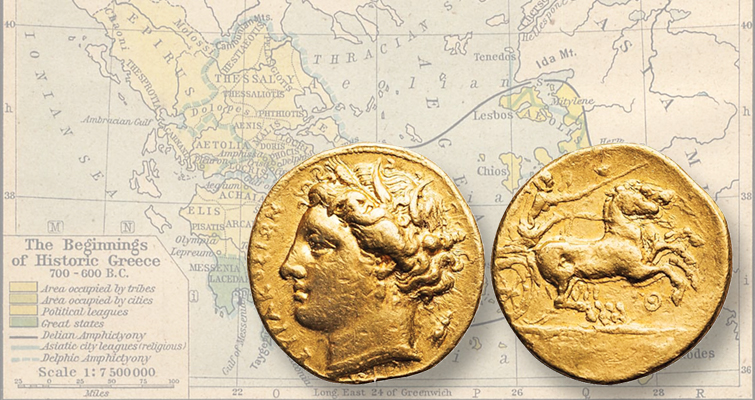 A gold decadrachm of Syracuse, Sicily, was issued hastily by two joint rulers in ancient Greece as Catharginians besieged the town. With no time for new dies, they erased a previous ruler's name from old dies to issue the new coinage.

Images courtesy of Spink and the Perry-Castañeda Library Map Collection.

The intentional removal of a ruler’s name from a coin die almost always reflects a change in political circumstances.

A highlight in Spink’s June 21 auction of the Squires Collection of Ancient Greek Coinage documents the turbulent history of Syracusan politics.

The “very rare” gold 60-litrae or decadrachm coin of Syracuse is expected to realize between $4,000 and $5,000 in the auction in London where the 67-lot collection from across ancient Greek history will be offered.

During the violent power struggles and turbulence in Sicily following Maenon’s assassination of Agathokles, the people of Syracuse appointed Hiketas their general and protector. For nine years he ruled as tyrant, but in 278 B.C. at the River Terias, he suffered a severe defeat at the hands of the Carthaginians.

Thoinon (also spelled Thoenon), one of his officers, expelled the now weakened Hiketas, ushering in conflict with another would-be ruler named Sosistratos.

The tyrant Sosistratos, of Akragas, attacked Thoinon, and the city teetered on civil war, according to Spink’s auction catalog.

Under seige from the Carthaginians, the two Greek competitors soon agreed to a truce, and sought assistance from Pyrrhos in fighting the Carthaginians. After landing his army in Sicily, Pyrrhos lifted the siege. However, to prevent further strife in Syracuse, he had Thoinon executed and forced Sosistratos to flee.

While awaiting the arrival of Pyrrhos, Thoinon and Sosistratos were still in need of coinage and likely had no time to produce new coin dies. Instead, they continued to use earlier dies, but only after erasing the name of Hiketas (appearing as E?I IKETA) from the reverse dies' exergue.

The example in the Spink auction struck from an altered die weighs 4.22 grams, slightly less than a Jefferson 5-cent coin.

The example in the auction exhibits some evidence of reverse die rust but is in Good Very Fine condition, according to the firm.

It previously sold at auction during Classical Numismatic Group’s June 24, 1998, sale, when it realized $1,430 including the 10 percent buyer’s fee.

For more information about the Spink auction, visit the firm’s website. 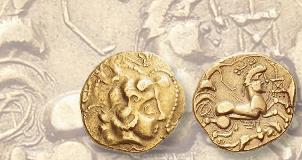