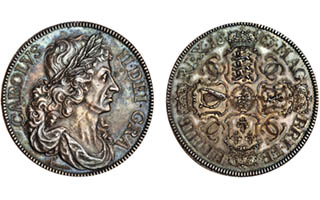 The famous Reddite crown, which is rarer than the more well-known sibling the Petition crown, was designed by Thomas Simon. The finest known example is being offered at auction March 27.

One of the most famous of all British crown coins is being offered at auction nearly 65 years after it was last sold.

The legend translates to “Render unto Caesar things that are Caesar’s. ...”

Also on the edge of the Reddite crown are a sun emerging from clouds and the abbreviation POST, invoking the Latin phrase “Post Nubila Phoebus,” meaning “the sun shines after the storm.”

The legend is an obvious reference to the restoration of the monarchy of Charles II.

Simon’s attempts to gain work as the royal engraver failed despite his reputation as the finest medallist and seal engraver of the time. He lost the commission because of his service to Cromwell during the Commonwealth after the Parliamentarians beheaded Charles I.