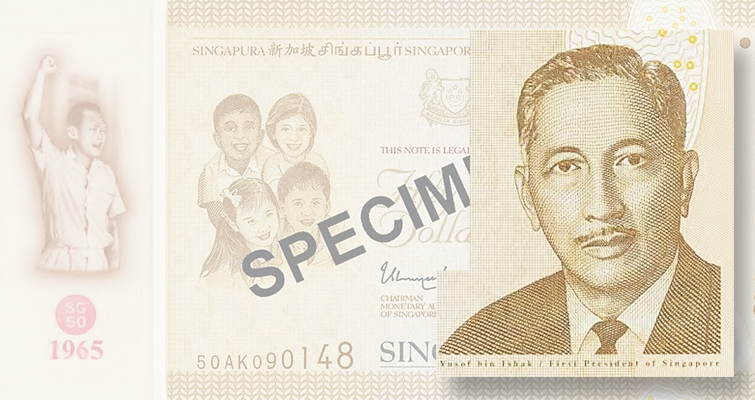 The first name of Singapore’s first president, Yusof Ishak, is misspelled as “Yusok” in packaging used for a $50 note commemorating the 50th anniversary of the state’s founding. 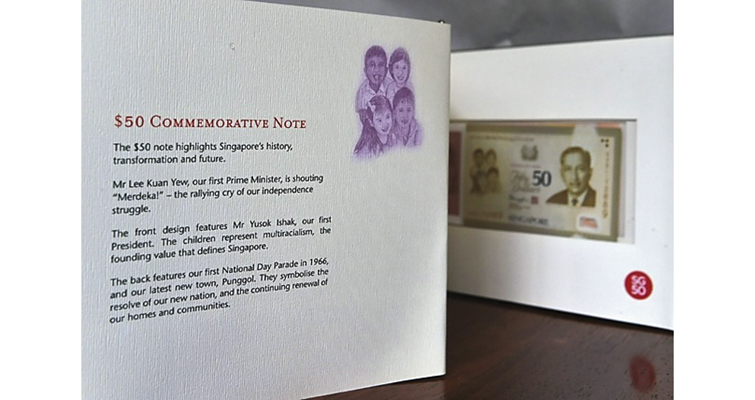 The first name of Singapore’s first president, Yusof Ishak, is misspelled as “Yusok” in packaging used for a $50 note commemorating the 50th anniversary of the state’s founding.

Commemoration of Singapore’s 50th anniversary has proven embarrassing, the result of a significant misspelling involving a commemorative note offered to collectors.

On Aug. 9, 1965, after a rocky two-year attempt at union, Singapore was ejected from the Malaysian federation. Now, the island nation is going all out to celebrate with coins and paper money the 50th anniversary of its independence.

In April it issued three coins, one gold, one silver, and one copper-nickel. This month it followed up with an issue of commemorative paper money, a set of six notes: 20 million $50 polymer notes and 15 million each of five different $10 polymer notes, all up to the latest standards of security.

Thousands of these, in various formats, as singles and in sheets were set aside for sale to collectors at a premium. Part of their appeal was the exclusive albums in which they were packaged. That’s where the trouble started.

The design of the commemorative $50 note highlights Singapore’s history, transformation, and future. The left side of the face shows the late Lee Kuan Yew, Singapore’s first prime minister, shouting “Merdeka!” — the rallying cry of the independence struggle. On the right is a portrait of Yusof Ishak, Singapore’s first president. The problem occurred on 50,000 folders containing the note, where the president’s first name is misspelled “Yusok.”

Ravi Menon, managing director of the Monetary Authority of Singapore, said in a statement: “I apologise on behalf of my colleagues who worked hard to prepare the notes and folders but are deeply disappointed that we made this most unfortunate mistake. We will put this right.”

On Aug. 20 the Monetary Authority announced it would issue stickers with the proper spelling to place over the error. The next day it informed the public that it will also reprint a new set of folders. The current folders will have the corrective stickers affixed beginning on Aug. 25. Those who have the current folders, and want to exchange them for new ones, will be able to do so at a later date. MAS will inform the public when they are expected to be ready.