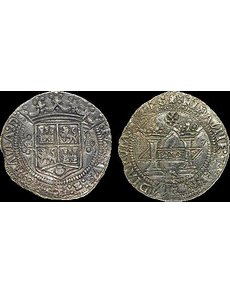 A puzzling Spanish colonial rarity from the early days of the Mexico City Mint, a circa 1538 undated silver 8-real coin that is one of three known, highlights Ira & Larry Goldberg Auctioneers’ Jan. 31 and Feb. 1 auction.

An undated (circa 1538) silver 8-real coin of Mexico City, one of three known (all of which were found at a circa 1550 Caribbean shipwreck), highlights Ira & Larry Goldberg Auctioneers’ Jan. 31 and Feb. 1 pre-Long Beach auction.

The coin, issued in the name of rulers Charles I (Carlos) and his mother, Johanna (or Joanna), has puzzled experts who cannot agree whether it was a regular issue or a trial piece, according to Ana Lonngi de Vagi, writing in Money of the World: Coins that Made History, edited by both Goldbergs.

“The cross potent above the pillars on the reverse, in lieu of the 8 of the value, suggests that this coin was a trial strike not intended for circulation,” she writes.

The lot description for the coin amplifies her theory.

“Emphasizing the experimental nature of this issue, one can discern that this coin is a test strike. Apparent in the fields are flattened designs, indicating that the present piece was overstruck on itself at least once, if not two or more times,” according to the cataloger.

Lonngi writes, “Not only is it a fabled rarity of early coinage in the Americas, but it is a wonderful example of the first crown-sized coins struck in the New World.”

The obverse of the coin has a Gothic-Style M Mint mark to the left of the castle, located at about the 9 o’clock position. The assayer’s mark is that used by Francisco del Rincon, who was the first assayer at the Mexico City Mint, serving from 1536 to mid-1538.

In addition to uncertainty regarding whether the piece is a trial or circulation strike, experts do not agree on the date, either: the auction house dates the coin to 1535 to 1536, but Lonngi and catalogers for Heritage Auction Galleries (which sold another example from the same wreck in 2006) list it as 1538 (the third example is reportedly in a private collection).

Heritage’s Jan. 8, 2006, lot listing mentions research done by pioneering numismatist Alberto Pradeau in 1947 from archival documents that, in transcripts from 1545, claim that “8 Reales were made briefly in 1538 until it was determined that they were too difficult to craft properly under the conditions that existed.”

Absent any survivors, specialists had only records and research to suggest these existed, until the 1990s discovery of a circa 1550 Caribbean wreck that, according to Heritage, included the three known examples of the 8-real coin “in a chest of about 2,000 silver coins from the early Mexican mint.”

The example in the Goldberg auction is graded Extremely Fine 40 by Numismatic Guaranty Corp.

It features a “bold, well-centered strike on nearly round flan,” but also exhibits “spots of minimal weakness” and areas of corrosion and toning.

Greece, Mysia, Kyzikos, circa 450 B.C. electrum stater, 16.08 grams, head of Attis wearing Phrygian cap on obverse, “one of the most engaging obverses of this splendid series,” Lot 3179, Extremely Fine.

Greece, Alexandrine Empire, Mazaios, Satrap of Babylon, circa 331 to 328 B.C. gold double daric, 17.1 grams, “third known of the type and second with the reverse design [facing] to the left,” Lot 3215, Choice Very Fine.