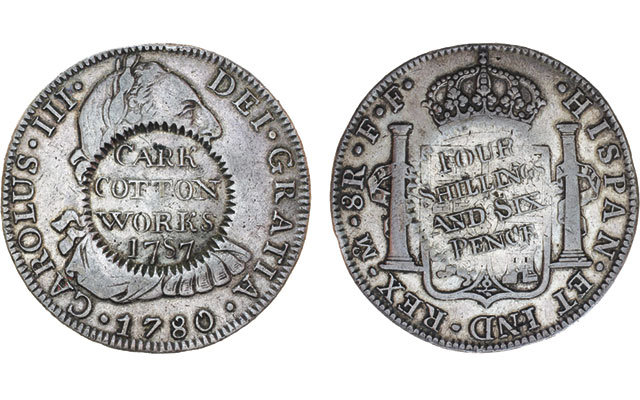 A 1780-Mo-FF silver 8-real coin was countermarked for use by Cark Cotton Works circa 1787 and is one of six examples known on a bust or portrait pillar dollar from the Mexico City Mint.

The 1780-Mo-FF silver 8-real piece, countermarked by Cark Cotton Works, a mill in northern England, is a one of six known examples of the type among about a dozen silver 8-real coins known with the Cark countermark. The countermarking has led to the pieces being cataloged as tokens.

The tokens include the merchant issuer’s name and 1787 date stamped on the Charles III portrait on the obverse, while the merchant’s designated denomination of 4 shillings and 6 pence is spelled out on the Shield and Pillars reverse.

England experienced an acute shortage of British silver coins from 1751 to 1816 because silver had become worth more than the legally designated price the Royal Mint could pay to acquire silver for striking. Spanish silver coins (and, less commonly, other world coins) circulated in their place, with merchants providing a market value. Merchants stamped valuations on the coins that were slightly higher than bullion value to discourage melting, but not so high as to spur counterfeiters, according to Eric C. Hodge, writing in an undated commentary for the Orsmkirk & Lancashire Numismatic Society.

The Cark Cotton Works opened in about 1785. Its operations included buying, spinning, manufacturing, and selling cotton goods, according to H.E. Manville, writing in Tokens of the Industrial Revolution, Foreign Silver Coins Countermarked for use in Great Britain, c.1787-1828.

Manville’s census includes the piece offered by Noble but does not include a similar piece (on a 1777-Mo-FM silver 8-real coin) that sold April 2, 2014, in a Dix Noonan Webb auction, which would be at least the sixth known example struck on a Mexico City Bust or portrait dollar host coin. Noble reports that the piece it offers is “one of six known.”

Hodge reports that 11 examples of the Cark countermark on silver dollars are known, but he does not provide a census, so it is unclear if his tally includes the example sold in April 2014.

Noble classifies the example it is offering as Very Fine and estimates it will sell for $2,500 Australian (about $2,203 U.S.).

For more about the auction, email the firm or visit its website.