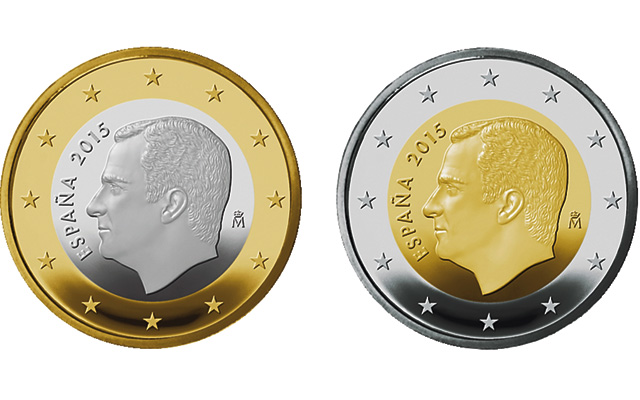 In 2015, Spain’s €1 and €2 coins will become the first circulation coins to bear an effigy of new ruler Felipe VI in a single portrait.

The Royal Spanish Mint on Dec. 15 unveiled new designs for the circulating €1 and €2 coins showing the new monarch, Felipe VI.

The coins, which will begin circulating in 2015, show the ruler in a solo portrait, the first circulating coins to show him by himself after his June 19 accession to the throne.

Felipe VI became king upon the abdication of his predecessor and father, Juan Carlos I.

There are strict limits on Eurozone members as to when design changes can be implemented, but a change in ruler is one such instance.

In Spain, the monarch appears on the €1 and €2 coins, with other designs selected for the remaining six denominations.

Both €1 and €2 coins are ringed-bimetallic issues.

The obverse of euro coins (also called the national design side) features a design or designs as chosen by the country.

The 12 stars of the European Union encircle the designs on each side.