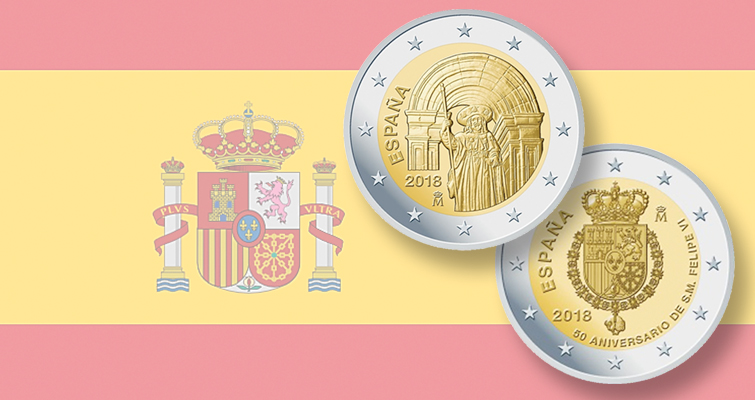 Spain on Feb. 1 launched both of its circulating commemorative €2 coins for 2018.

One of the coins highlights the UNESCO’s World Cultural and Natural Heritage Site of Santiago. The other marks the 50th anniversary of King Felipe VI’s reign.

The obverse of each coin features its special design.

The City of Santiago de Compostela was declared a World Cultural Heritage site by UNESCO in 1985, considering its urban beauty and monumental integrity along with the deep echoes of its spiritual and cultural significance during the Middle Ages as a destination for the Camino de Santiago Pilgrimage.

The Camino de Santiago (The Way of St. James) is a large network of ancient pilgrim routes stretching across Europe that meet at the tomb of St. James in Santiago de Compostela in north-west Spain.

The design highlighting the Santiago site reproduces a sculpture of Santiago taken from above the Holy Door of the Santiago de Compostela Cathedral. At left in a semicircle, is the word ESPAÑA, while at the bottom left is the year of issuance, 2018, with the Mint mark below it.

At left in a semicircle, is the word ESPAÑA, while at bottom left is the year of issuance, 2018. Beginning below the coat of arms and arcing up the right border is the inscription 50 ANIVERSARIO DE S.M. FELIPE VI. The Mint mark is at the top right.

The €2 coin weighs 8.5 grams and measures 25.75 millimeters in diameter. Each nation is allowed to issue up to two different circulating commemorative designs annually, with designs of their choosing, though few nations issue the maximum number of designs. 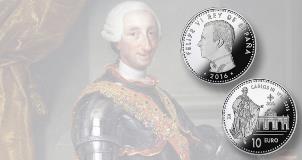 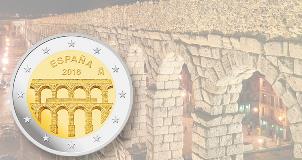 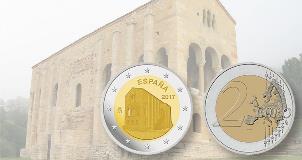