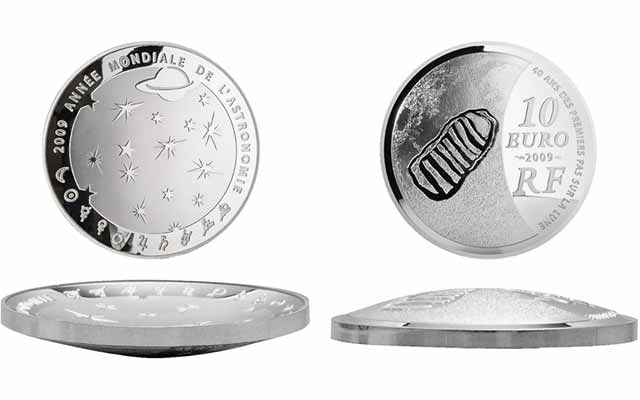 A 2009 coin program from the Monnaie de Paris marking the International Year of Astronomy was popular because it not only coincided with the 40th anniversary of the Moon landing, but was created to mimic the moon’s shape.

Editor's note: The following is the first of a multi-part Coin World series about the prominence of space-themed collector coins from all over the world prepared by Louis Golino for the October 2015 monthly edition.

The two most important attributes of a modern coin for the typical collector are the coin’s theme and design. A collector who finds those aspects of a coin compelling and complementary is likely to want the coin.

Of the myriad themes depicted on modern world issues, astronomy and space are certainly among the most popular.

Exactly why so many coin collectors have an interest in astronomy is unclear, but it could have something to do with the fact that many people started collecting coins when they were children. Children are often fascinated by space travel, the solar system, and the planets, especially if they were young when the Apollo 11 landed on the moon in 1969, or at the time of John Glenn’s space orbit in 1962.

Many coins with space-related themes have been issued over the years by world mints, but certain issues have been especially popular with collectors and helped shape interest in this segment of numismatics. Many of them have also been strong performers on the secondary market and are some of the most innovative modern coins ever minted.

In 2009 the Paris Mint in France issued silver and gold coins to commemorate the International Year of Astronomy.

Four coins were issued: a silver €10 coin, a silver €50 coin, a gold €50 piece and a gold €200 coin with a blue center. The obverse depicts an astronaut’s boot print on the moon, while the reverse shows the planets and some stars.

Because the date coincided with the 40th anniversary of the Apollo 11 moon landing, many people see it as a coin commemorating that event, which it does, but it was primarily issued to honor the International Year of Astronomy that was marked in 2009.

All of these coins have since become collector favorites even among those who do not collect French coins. And a key reason is that these small silver and gold coins were shaped like the moon, convex on the reverse representing the lunar surface, with a concave obverse showing the bowl of the sky, an intriguing shape for a coin.

Dome-shaped coins have since become more common, but the 2009 French issues were the first major modern world issues to be minted in this unusual shape. And collectors found it compelling less because of the novelty of the shape, and more because the shape was suited to the subject matter. That is the same reason the 2014 Baseball Hall of Fame coins from the U.S. Mint were a hit.

In 2009 the Congo issued a coin honoring the 50th anniversary of the lunar probe Luna III, which landed on the moon in 1959. The coin also commemorated the 40th anniversary of the Apollo 11 moon landing. It depicts the moon’s surface, though not with precise detail, and also includes a small chip from the moon.

It was available for less than $100 when issued but today sells for well over $500, garnering about $700 in a recent eBay auction. It is not precisely clear why it has done so well, but the high value of the coin is another testament to the popularity of coins that depict space themes.