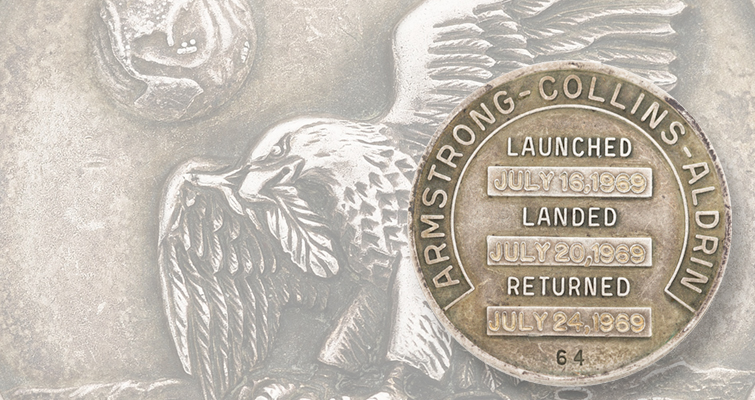 Silver Apollo 11 medal was flown aboard the spacecraft that took astronauts on the first moon landing mission in 1969. 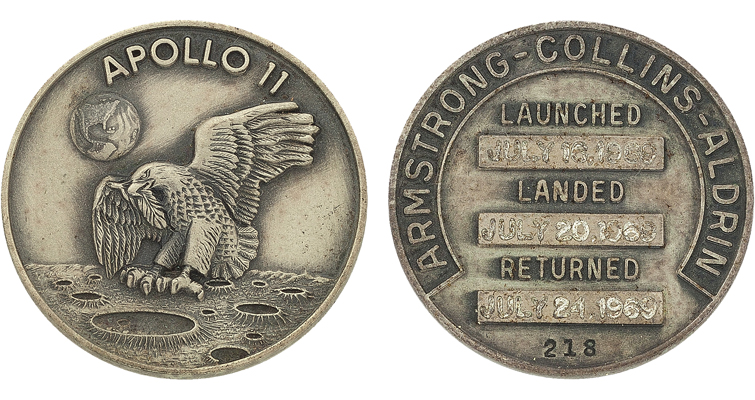 This Apollo 11 medal is originally from the personal collection of the mission command module pilot, Michael Collins. 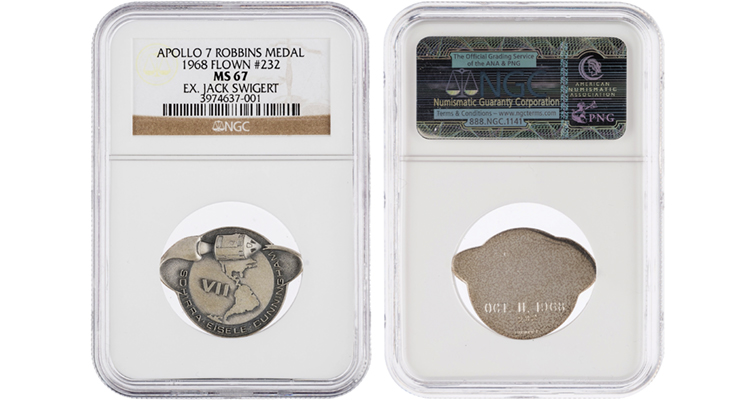 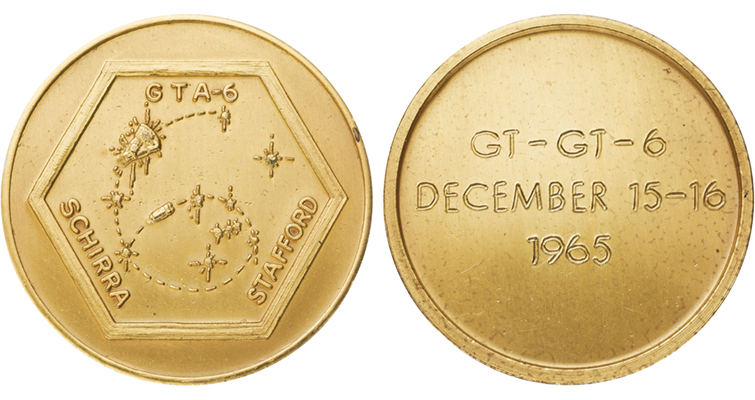 This 26-millimeter medal was one of nearly 100 Fliteline medals aboard the Gemini spacecraft on Dec. 15, 1965.

Medals that have flown aboard spacecraft from America's space program are among the collectibles to be offered in a Nov. 11 sale by Heritage Auctions.

Among the items to be offered are medals from the Apollo 7, Apollo 11 and Gemini 6A missions, including an Apollo 11 medal originally from the personal collection of the mission command module pilot, Michael Collins.

The obverse depicts Collins’ early and original concept for the mission insignia, with an eagle carrying an olive branch in its mouth. NASA thought the sharp, open talons of the eagle looked too “warlike” and the olive branch, representing peace, was moved to the claws.

The reverse of the medal offered features the serial number 64 in addition to the dates of the mission and surnames of the crew.

The obverse design was modified and adapted by Assistant U.S. Mint Engraver Frank Gasparro for the reverses of the Eisenhower and Anthony dollar coins.

With Serial No. 232, an Apollo 7 Robbins medal in the offering is graded and encapsulated Mint State 67 by Numismatic Guaranty Corp.

The 32-millimeter by 24-millimeter sterling silver medal is originally from the personal collection of a mission support crew member, Jack Swigart.

According to the auction lot description, the medal was “one of only 255 flown aboard Apollo 7, the first manned mission in the Apollo program, October 11-22, 1968, with crewmembers Wally Schirra, Donn Eisele, and Walt Cunningham. It was an eleven-day Earth-orbital mission, the first manned launch of the Saturn IB launch vehicle, and the first three-man American space launch.”

"The obverse of the medal features the mission insignia depicting a command service module, engine firing with the trail from that fire encircling a globe and extending out, symbolizing the Earth-orbital nature of the mission. The Roman numeral 'VII' appears in the South Pacific Ocean and the crew's names appears on a wide arc at the bottom. The reverse has the date of the launch, the serial number, and the sterling and Robbins hallmarks.”

An example of a gold-colored, 26-millimeter Fliteline medal flown aboard the Gemini 6A, which performed a space rendezvous with Gemini 7 on Dec. 15, 1965, is also among the space-flown medals offered.

The medal was among approximately 100 such medals aboard Gemini 6A manned by astronauts Wally Schirra and Thomas Stafford.

According to the auction lot description: “The obverse features the hexagonal mission insignia reflecting the mission number; the spacecraft trajectory also traces out the number ‘6.’ The Gemini 6 spacecraft is shown superimposed on the 'twin stars' Castor and Pollux, for ‘Gemini.’ The obverse also has ‘Schirra’ and ‘Stafford’ with the original mission designation ‘GTA-6’ (for Gemini-Titan-Agena). The reverse has the dates of the flight and the revised mission designation ‘GT-GT-6.’”