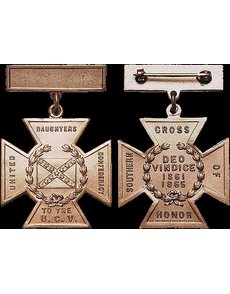 Producing the Southern Cross of Honor, shown, was contracted in 1904 to Whitehead & Hoag for the United Daughters of the Confederacy.

After 1879, when the federal occupation of the defeated South had ended and wartime passions cooled following the American Civil War, it became possible to set up Confederate veterans’ organizations and related auxiliaries.

Most prominent were United Confederate Veterans (founded June 1889) and the United Daughters of the Confederacy (1894).

UDC busied itself early on with formulating an acceptable Southern version of the history of “the War Between the States,” before turning to recognition of Confederate veterans in 1899. Gen. Robert E. Lee had opposed awarding of medals out of concern that many worthy candidates were sure to be overlooked in the hurry and confusion of all-out war.

Mrs. Alexander S. Erwin, daughter of secessionist firebrand Howell Cobb, firmly believed that UDC could rectify this situation for surviving, honorably discharged veterans. She designed a decoration to be called the Southern Cross of Honor and presented it before the 1899 UDC convention.

Adopted with enthusiasm, it took the form of a 33.8-millimeter bronze cross pattée hanging from a pinback bar that first bore the name of Atlanta manufacturing jeweler Charles W. Crankshaw.

The center of the obverse bears the Confederate battle flag in laurel wreath; the arms are inscribed, UNITED – DAUGHTERS – CONFEDERACY – TO THE U.C.V.

The reverse wreath surrounds DEO VINDICE (with God our Vindicator) from the Confederate Great Seal with dates 1861-1865. The arms are inscribed SOUTHERN – CROSS – OF – HONOR.

A red mahogany patina in generally observed, with the pinback left blank for engraving.

UDC fired Schwaab for striking 1902-1903 convention badges that appropriated much of the Cross of Honor design without authorization.

In 1904 the largest medallic firm in the U.S. was Whitehead & Hoag of Newark, N.J., which then contracted to produce the cross with the existing design, but displaying a wholly different smooth tan-gold patina and microscopic maker’s name on the reverse.

The first crosses were presented in 1900 to veterans with honorable service in any branch of Confederate service. Ultimately 78,761 were presented between 1900 and 1959, including a final posthumous award to Confederate Rear Adm. Raphael Semmes.