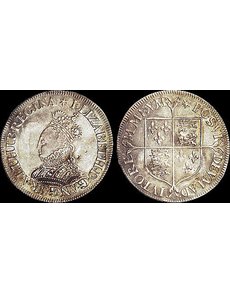 On this undated Elizabeth I milled shilling, the star in the obverse and reverse legends denotes a milled coin.

Eloye Mestrelle, the man responsible for England’s first milled coinage, died in disgrace at the end of a hangman’s rope.

For centuries before the reign of Elizabeth I (1558 to 1603), coins were struck by hand. With the rare exception of the odd cast issue, coins were produced the same way for centuries.

A worker would place a heated piece of metal between two dies and another man brought a hammer down hard to impress the design into the planchet.

The ancient Greeks and Romans had produced astounding, high-relief works of art by hand; but by the Middle Ages, hammered coinage had deteriorated into crudely engraved, sloppily produced affairs.

Elizabeth wanted better. In 1560 Mestrelle, a Frenchman who apparently learned his craft at Versailles, was hired to produce England’s first machine-made or milled coins at the Royal Mint in London. He was paid £25 a year and lodging.

Little is know about Mestrelle before he arrived in England, but the first official mention of him is a telling document. In 1559, the queen pardoned him “for all treasons, felonies and offences committed … in respect of clipping or counterfeiting coin.”

From 1560 to 1571, Mestrelle supervised perhaps a dozen men, in the laborious process of creating the uniformly thick, exact weight, round planchets that the milled process required and operating the screw presses that impressed the designs into the new style coins. The new coins, which were widely prized by the populace, were fully round and generally of good quality.

At the Royal Mint, though, resentment simmered among the hammered-coin workers,
who feared for their jobs, and the officials, who resented the added cost of producing milled coins.

While milled coins were of superior quality, they took longer to make. In an article published in the 1983 annual journal of the British Numismatic Society, D.G. Borden and I.D. Brown write that the issue came to head in the early summer of 1572 when Sir Richard Martin, lord mayor of London and newly appointed warden of the mint, ordered a series of tests. In an hour test, two of Mestrelle’s men produced 22 sixpence blanks to the hammered coin workers’ 280.

Barred from the government’s mint that year, Mestrelle apparently set up his own. In October 1577 he was arrested on a charge of counterfeiting. His goods were seized and his widowed mother cast out into the street. The next spring he was taken to Tyburn gallows and hanged.