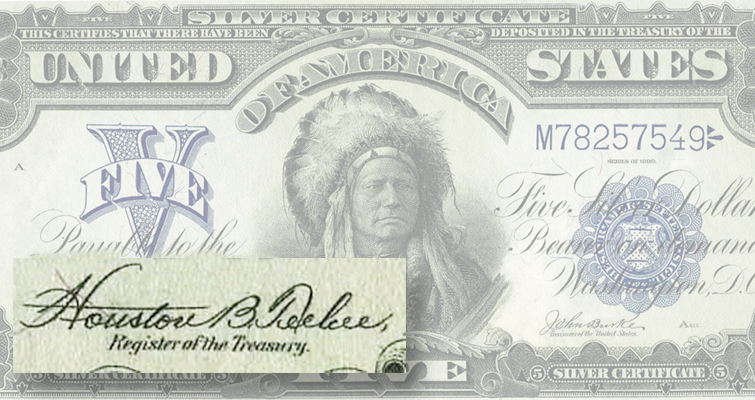 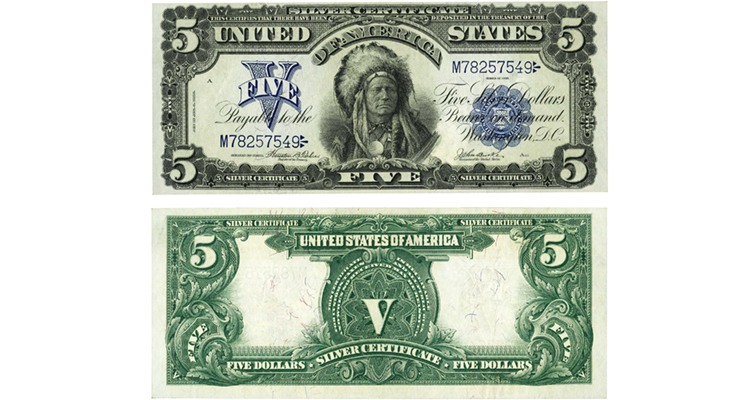 One of the most common as well as most popular issues of large-size notes is the silver certificate known colloquially as the “Indian Chief note” because of the bust of Oncpapa Sioux Chief Ta-to-ka-in-yan-ka, aka Running Antelope. Part of the reason for the marketability of this issue, which comes in 11 different signature combinations, is that it is the only issue of U.S. paper money on which a Native American is the central feature.

Southern Indiana collector Norm Pender points out that one of the Chief notes is distinctive. Friedberg 278 has, not one, but two Native Americans on it. The other is Register of the Treasury Houston Benge Teehee, whose facsimile signature appears on the note. Teehee was appointed by Woodrow Wilson and served from March 24, 1915, to Nov. 20, 1919. His signature appears with that of Treasurer John Burke.

Teehee’s father was seven-eighths Cherokee and his mother half Cherokee. He was an accomplished Oklahoman — lawyer, alderman, mayor, county attorney, state representative and oil executive. But up to 1924 one thing was missing from his resumé — the title of citizen. Even though he was the man whose name was on every bank note printed by the United States for almost five years, as a Native American, until the Indian Citizenship Act was passed he could not become a citizen and could not vote in an election. Teehee was inducted into the Oklahoma Hall of Fame in 1942.