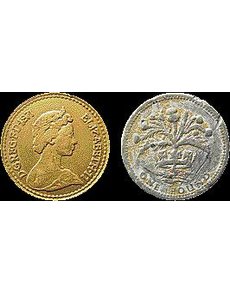 The quality of fake £1 coins varies widely, but some fakes sport obvious errors, like the 1971 date on the coin at left, which predates the £1 coins by 12 years. Other obvious fakes include the lead or tin alloy cast piece, right, known as a “garden shed effort.” They do not have to circulate extensively before wear or damage breaks through the thin plated surface.

All images courtesy of Ken Peters.

To hear the queen’s assay master say it, the only solution to the counterfeiting problem plaguing the £1 coin is a simple answer with a most complex result.

“There is only one real solution, and that is recoinage that uses more modern technology than we had in 1983 that makes it more difficult to counterfeit,” said Phil Hawkins, head of Operations Support at Britain’s Royal Mint.

Hawkins’ traditional title is queen’s assay master, and in that role he is the Royal Mint’s point man with technical, financial and legal agencies that have a stake in coinage, especially counterfeits.

An estimated 48 million fake £1 coins are in circulation in the United Kingdom, according to the Royal Mint, based on figures from a semi-annual survey last conducted in November, results for which were released in early March.

That figure is higher than the 46.38 million figure Coin World reported in coverage in its April 30 issue. Coin World’s estimate used, as a base total of £1 coins in circulation, a number from March 2011 (the latest date for which figures were then available); the actual number is slightly higher, around 1.55 billion.

The reported uptick, from 2.94 percent in the May 2011 survey to the 3.09 percent discovered in the November 2011 survey, can’t be explained by a signal newsmaking event like a bust of a counterfeiting ring, Hawkins said.

“We think there are stocks of coins still out there that were previously manufactured that are being placed into circulation,” he said. These coins are not coming from active operations, he said, based on police intelligence and cooperation with the United Kingdom’s Serious Organized Crime Agency.

The survey takes a sample of coins from cash handling centers across the United Kingdom and tests them to see how many of the coins are counterfeit.

The Mint works with SOCA, the Payments Council (a financial industry group), cash handlers and the vending industry by distributing sets of coins, genuine and counterfeit, so coin sorters can set their equipment to maximize detection and keep the fakes from circulating.

“Clearly it’s an uphill battle as evidenced by our survey numbers, but a collaborative approach will minimize the increase,” said Hawkins.

The effort resulted in the withdrawal of two million fake £1 coins last year from the network, he said.

In doing the survey, the Royal Mint tracks the fakes by 12 geographic regions so that officials can potentially pinpoint “hot spots,” based on regional variations in the type of counterfeits. “We can provide that additional level of intelligence to stop it at the source; you can see the common die defects, for example, to use as almost the DNA or the fingerprint for certain counterfeiting operations,” Hawkins said.

The quality of counterfeits ranges from the rudimentary cast lead covered by a brass coating to the sophisticated examples struck by dies and collars on nickel-brass metal and with edge lettering. Some of the counterfeiters use “equipment as we would have at the Royal Mint,” Hawkins said, pointing to the famous case of Marcus Glindon, who was convicted in 2007 of producing 14 million fake £1 coins.

The £1 coin is a particularly easy mark for such a high value coin, according to the assay master.

“We’re hampered by the fact the coin has been in circulation for 29 years and it’s monometal, a single alloy,” Hawkins said. “It has a small diameter, [it is] a relatively easy composition to copy as compared to a bi-color [ringed bimetallic like the £2 coin] which could incorporate additional security features. We’ve given people plenty of time to practice copying this coin.”

Nineteen different reverse designs have been used since the coin made its debut, making it harder for the noncollecting public to determine whether they have a coin that is legitimate.

The number of designs “is an issue we are extremely mindful of. It adds interest and attractiveness when new coins are issued.”

Hawkins conceded that design continuity going forward is a serious consideration for any future £1 coin design.

“We would maybe restrict the future [changes] to other coins, maybe the 50-pence — which doesn’t have the same number of counterfeits, or the £2 [coin]. We don’t expect a new design to deter counterfeiters from their activities, but we are aware [the number of designs] is a consideration when introducing a replacement.”

Hawkins said any decision to scrap the current coins and issue new versions would not be determined solely by the percentage of fakes in circulation.

“There is no internationally recognized number” that would trigger a coin replacement process. “It depends on individual circumstances, including public confidence. People [in the United Kingdom] are aware of the level but are still confident” in the £1 coin, Hawkins said. “If a decision is made — and it will be made by the Treasury, not the Royal Mint — we are prepared; we have prepared alternative alloy prototypes with additional security features.”

Such a decision would be costly, a logistical chore and not taken lightly. Right now, Hawkins is busy preparing for the May survey.

The survey will determine whether the ratio of counterfeit coins to genuine coins has changed.

Public awareness of the counterfeiting of the coins has risen in recent years, in part because of a campaign by a coin collector in the United Kingdom.

Ken Peters, president of the Counterfeit Coin Club in the United Kingdom, has waged a very public campaign to alert the public about the counterfeit £1 coins in circulation (Coin World, March 30, 2009). ¦