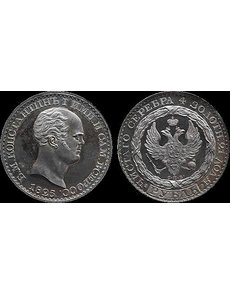 An 1825 Constantine pattern ruble, one of five examples in silver, is on loan from the Smithsonian’s National Numismatic Collection to the Hillwood Museum for an exhibition dedicated to the 400th anniversary of the Romanov dynasty.

An 1825 Constantine ruble pattern from the Grand Duke Georgii Mikhailovich Collection within the Smithsonian Institution’s National Numismatic Collection is on temporary loan to Hillwood Museum for its celebration of the 400th anniversary of the Romanov dynasty.

The silver pattern is one of five examples struck in honor of a Russian czar who never was.

More than 10,000 Russian coins and 1,250 medals reside in the collection once owned by Mikhailovich, nephew of Czar Alexander II of Russia. The collection forms the basis for the National Numismatic Collection’s Russian section.

Hillwood’s exhibition, “Pageant of the Tsars: The Romanov Coronation Albums,” with which the 1825 Constantine ruble pattern will be included, opened Feb. 16 and runs through June 8.

According to the Hillwood website www.hillwoodmuseum.org, “The pomp and pageantry of imperial coronations were documented and promoted in lavish albums that became almost as important as the extravagant events themselves. To mark the 400th anniversary of the founding of the Romanov dynasty in 1613, Hillwood presents a special exhibition of the albums created over the course of the family’s reign.”

Hillwood was the home of Marjorie Merriweather Post, a businesswoman, collector, museum founder and philanthropist.

After the Dec. 1, 1825, death of Czar Alexander I from typhus, his brother, Constantine Pavlovich, governor of Poland, was proclaimed czar against his will, and pattern coins were prepared in secret at the St. Petersburg Mint.

When Constantine declined to reign as czar, Grand Duke Nicholas Pavlovich, Constantine’s younger brother, became czar. During the regnal confusion, an unsuccessful coup was staged by the military to overthrow Nicholas and usurp power.

Due to Constantine’s wishes and Nicholas’s elevation as czar, the St. Petersburg Mint was left with five potentially embarrassing patterns having Constantine’s portrait on the obverse as czar. The patterns were subsequently secreted at the Ministry of Finance.

The existence of the pattern rubles remained a state secret until 1879, when Czar Alexander II requested the five pattern pieces from the finance ministry. Pieces eventually were distributed to museums and individuals.

The coronation album of Nicholas I is open to the page of Nicholas embracing his brother Constantine (the moment in the album where they show onlookers that they were indeed reconciled and Constantine agrees that Nicholas is the rightful ruler).

Hillwood’s exhibition represents the most complete presentation ever of the coronation albums, including two copies of the monumental Alexander II album of 1856, one in its original binding, according to the museum. ¦