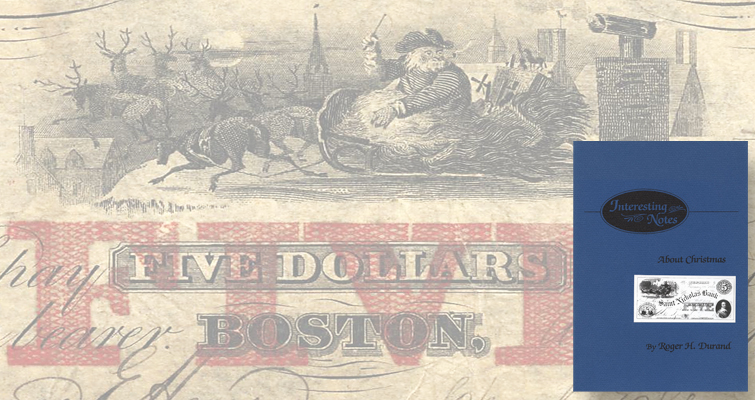 Though out of print, specialty works on obsolete notes cover a variety of topics, including the ever-popular Christmas notes.

The following is Wendell Wolka's Collecting Paper column from the Sept. 28, 2015, issue of Coin World:

Last month we discussed the first set of building blocks needed in an effort to build a good knowledge base before collecting obsolete paper money.

I recommended that, depending on the states you might be interested in, you would probably benefit from some combination of Society of Paper Money state catalogs, the new Whitman obsolete catalogs, and one or more of the four volumes of The Standard Catalog of United States Obsolete Bank Notes 1782–1866.

But what if you’re not collecting by state?

Let’s say you’re collecting topically, like only notes with locomotives or steamboats or Indians. Well, a number of specialty volumes complement the basic state catalogs.

Roger Durand has written a number of books on portraits, vignettes, and the like used on obsolete notes. Although all are now out of print, they are available on venues like Amazon and eBay. Catalogs on more esoteric types of notes are also available — for example, a book covering notes used by business colleges and one covering advertising notes are available from numismatic book sellers. If you have other interests, feel free to contact me and I will be happy to let you know what’s available.

If your interests are in the area of research, I have found the following three online services invaluable — Ancestry.com, Fold3.com, and Newspapers.com. These three services allow you to research a wide variety of census and other records as well as newspapers of the period. Team these up with search engines like Google or Bing and you have a pretty powerful research tool belt at your disposal.

Also don’t overlook other period documents in your state and local libraries, like city directories, state agency documents and even banking department reports and documents. These will allow you to fill in a lot of blanks.

Finally, don’t underestimate networking with others who have similar interests. I would recommend membership in the Society of Paper Money Collectors as a way of both networking and garnering new information.

If any of my readers have other thoughts on this subject, just send me an email and I will share the ideas with everyone.