Officials respond to counterfeiting with wave of design changes 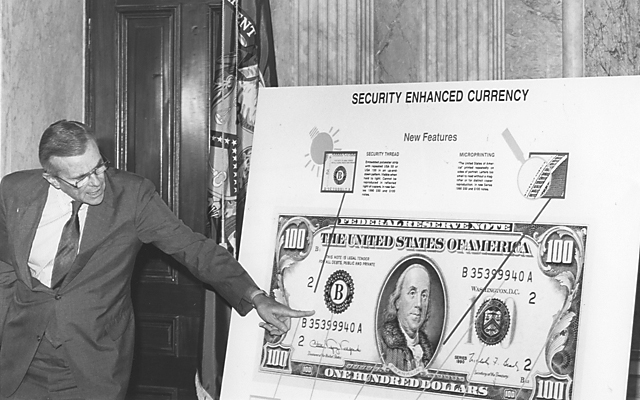 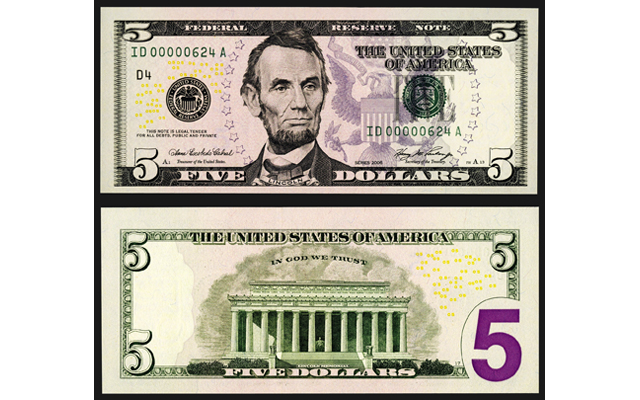 Because of an increase in $100 forgeries made with “bleached” $5 Federal Reserve notes, the BEP began printing colorized Series 2006 $5 FRNs.

On July 25, 1991, U.S. Treasury secretary Nicholas F. Brady and Federal Reserve Chairman Alan Greenspan unveiled the Series 1990 $100 Federal Reserve note, which featured a modest change to the existing design: a denominated, vertical, polyester security thread and microprinting around the vignette of Benjamin Franklin. The redesigned notes would enter circulation in August of 1991.

The new security features were the Treasury’s answer to an increase in the counterfeiting of $100 FRNs, which circulate around the globe.

A repeating microprinted message, UNITED STATES OF AMERICA, can be seen around Franklin’s portrait and appears as an additional line of ink, which can only be read when magnified.

The security thread appears vertically to the left of the black Federal Reserve seal. The thread bears microprinting of USA 100 repeated along the length of the thread. The thread can be seen only when the note is held up to the light.

But a second wave of increased anti-counterfeiting devices was soon to appear. Details about the second phase of paper money design changes during the 1990s were made public July 13, 1994, during a hearing before the House Banking, Finance and Urban Affairs Committee.

The new designs became a reality with the issuance of the Series 1996 $100 Federal Reserve note early in 1996. The 1996 release carried the most significant design changes to U.S. paper money in 67 years.

As announced in 1994, the new notes also had a watermark portrait of Benjamin Franklin, and additional anti-counterfeiting features. The primary colors of the notes remain black and green.

However, the Series 1996 $100 FRNs were the first to feature color-shifting ink, found on the numeral 100 in the lower right corner of the face. Other changes made to the note design were not aimed at preventing counterfeiting.

The addition of subtle, background colors in FRNs in 2004 was the next makeover for the small-size notes. The first of the color-added notes were the Series 2004 $20 FRNs, with shades of pastel green and peach ink in the background, which were released in October 2003.

The redesign of the $5 FRNs was not in the master plan, but in 2005 Secret Service agents working with their counterparts in Colombia had discovered genuine $5 FRNs were being bleached and overprinted with designs from $100 FRNs.

One of the displays showed the machinery used to “bleach” ink from genuine $5 FRNs and to print $100 FRN designs on the genuine paper.

Because of this, U.S. Treasury officials announced in June 2006 that the $5 FRN would undergo a redesign and upgrade of security features. Redesigned $5 FRNs were placed into circulation in March 2008.

Government officials did not stop in their efforts to improve the anti-counterfeiting features of U.S. paper money, though the introduction of a new generation of notes would be delayed beyond their original release date.