Home Hobbyist: Is it genuine or a fake? 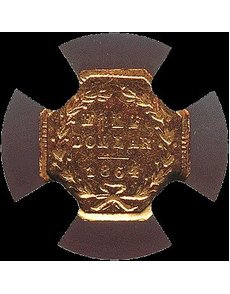 Numismatists recognize four kinds of tiny metal disks being billed as “California fractional gold” or “California small denomination gold,” one of the most alluring but also pricey series for the typical home hobbyist.

The first kind, the true California small denomination gold coins, were struck from 1852 to 1882. They usually come in denominations of quarter dollar, half dollar and dollar. All have the inscription DOLLAR or abbreviation “D.” or “DOL.” Genuine examples can cost hundreds and sometimes thousands of dollars.

A second kind, California gold tokens, were privately minted on gold planchets until around 1871 and usually depict a miner or other Western scene on the reverse.

A third kind, California jeweler’s charms, are made of gold and were sold as souvenirs of the West typically in the 1930s.

Replica brass or plated disks are a fourth kind. These are fakes and usually feature a bear on the reverse (genuine pieces do not show a bear). They have been flooding the coin market, especially on eBay, which banned replicas in 2012. Moreover, the brass disks do not carry the word “copy” and are in violation of the Hobby Protection Act.

Recently on an online auction portal, a seller offered an “1852 California Gold Coin.” Everything in the seller’s four-word description was wrong: The replica was not minted in 1852 but most probably within the past decade. It was not mined in California, it is made of brass and it is not a coin.

I reported this to the auction portal, whose terms of service expressly forbid counterfeits or falsely described lots (i.e. brass labeled as gold).

“These replicas have plagued the hobby for decades. The best rule of thumb is this: If the coin does not have the denomination in some form or fashion (cents, D., Dol., or Dollar), stay away from it. The words ‘California Gold’ are not enough by themselves.”

Ian Russell, owner of auction house GreatCollections, says: “We get offered a lot of these on consignment, which we just send back. Once a collector finds out they got ripped off like this, they will rarely return to the hobby.”

For those buying and selling small denomination gold coins, PCGS CoinFacts is indispensable. It contains a regularly updated, comprehensive list of authentic types with photos to identify variety and value.