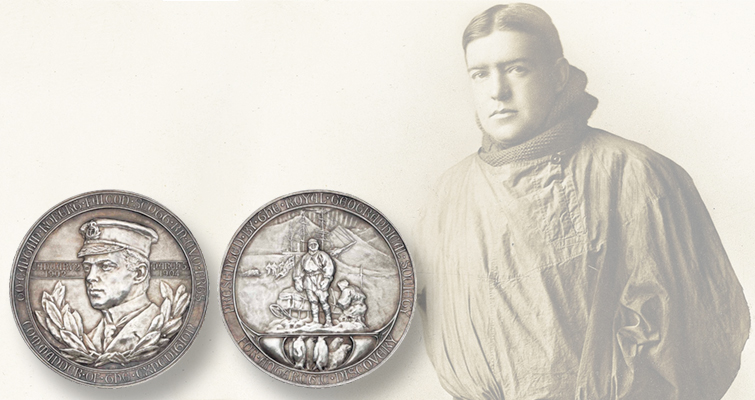 A Royal Geographic Society silver medal given to Sir Ernest Shackleton for his role in Capt. Robert F. Scott’s Discovery Expedition is in the Christie’s Oct. 8 auction. 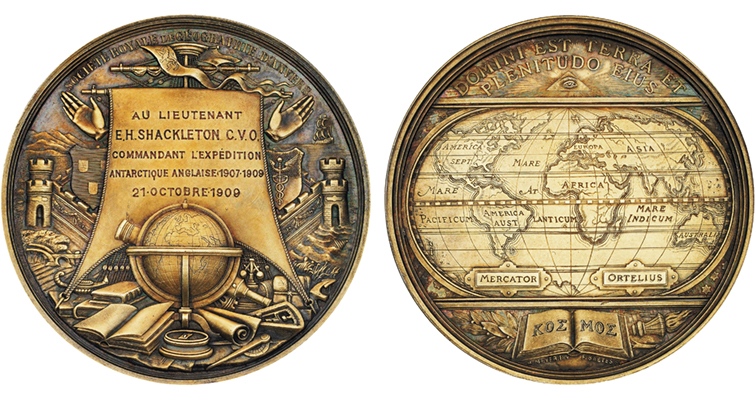 Shackleton earned this 1909 gold medal from the Royal Geographic Society of Antwerp for his 1907 to 1909 Nimrod Expedition, when the explorers reached a new record Furthest South point. 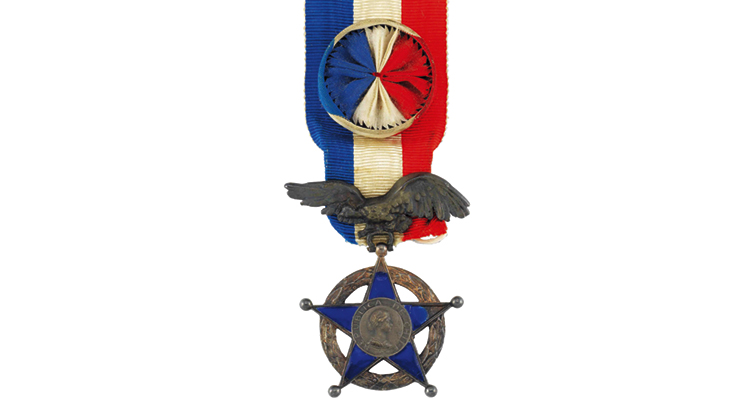 After Shackleton’s failed Endurance Expedition, he and his team successfully arrived in Chile, where Shackleton was presented this 1916 Order of Merit.

Medals, orders, and decorations earned by Sir Ernest Shackleton for polar exploration are headed to auction.

Christie’s London offers 12 lots of Shackleton’s property during its Oct. 8 Travel, Science and Natural History auction. The lots are offered as Nos. 141 to 152 in the sale.

Shackleton, a polar explorer who led three British expeditions to the Antarctic, was one of the principal figures of the period known as the Heroic Age of Antarctic Exploration. He was the most decorated of all the polar explorers, according to Christie’s.

All of the pieces in the Shackleton portion of the auction have a provenance “by descent from the recipient to the present owner,” according to Christie’s.

His first effort at polar exploration was mixed, as he was forced by illness to leave Capt. Robert F. Scott’s British Antarctic Expedition (also known as the Discovery Expedition after the group’s ship) in 1903, after he, Scott and Edward Wilson established what was then a new record “Farthest South” distance, some 200 miles from the South Pole.

In 1904, for his role in the Discovery Expedition, Shackleton was awarded a silver version of London’s Royal Geographical Society gold medal.

The Royal Geographical Society issued special medals to the officers, staff, and crew of the Discovery who served throughout the expedition. The gold medal was awarded to Capt. Scott (and that example is now in the British Museum).

The medal was designed by Gilbert Bayes and shows a bust of Scott above two laurel branches on the obverse and an Antarctic scene (members of the sledging party, the ship and a sledge, above seals and penguins) on the reverse.

The silver version bestowed on Shackleton (whose name is incused on the rim) is offered as lot 141 in the Christie’s auction. The medal has an estimate of $32,000 to $63,000.

Shackleton was honored with a similar special award, in gold, by the Society on his return from the Nimrod Expedition (again,named for the ship that carried the explorers) in 1909.

Fourteen of the gold medals awarded to Shackleton, including the London Royal Geographical Society gold medal for Nimrod, are no longer in the family’s possession, according to Christie’s.

One gold medal, however, is offered as lot 146 in the auction.

This 1909 Royal Geographical Society of Antwerp medal honors Shackleton for his successful 1907 to 1909 Antarctic (Nimrod) Expedition.

Though Shackleton failed to make the Nimrod Expedition’s main goal, the South Pole, turning back some 97 nautical miles short, the journey of some 1,755 miles was ground-breaking, as Shackleton, Frank Wild, Jameson Adams, and Eric Marshall reached a new “Farthest South” latitude, only 112 standard miles from the Pole. The explorers discovered the Beardmore Glacier (and named it after Shackleton’s patron) and were the first persons to see and travel on the South Polar Plateau.

Shackleton embarked on a series of lecture tours at home, on the continent, and in North America, and was showered with foreign decorations by heads of state and societies, pieces that compose part of the Christie’s auction.

Another of Shackleton’s ventures would end in disaster, but without loss of life.

Shortly before World War I broke out, Shackleton began the Imperial Trans-Antarctic Expedition of 1914 to 1916, intending to make a first crossing of the Antarctic Continent.

His ship Endurance was beset and crushed by ice, and sank in the Weddell Sea in early 1916. The expedition then turned into an epic tale of survival as expedition members journeyed on foot across the ice and in open boats on the sea until they reached Elephant Island. Shackleton then left most of his men for another long journey to another island where help could be obtained. All of the men from the Endurance survived, because Shackleton received help from the Chilean authorities and eventually retrieved his marooned crew from Elephant Island.

Shackleton arrived in Punta Arenas with his rescued men on Sept. 3, 1916, where they enjoyed the hospitality of the Chilean port and its British colony before eventually being presented to the Chilean president and receiving their awards.