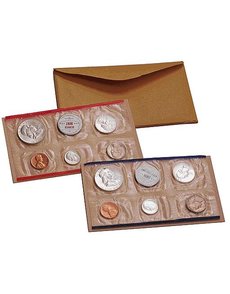 Coin World’s value listings for Uncirculated Mint sets shows the 1959 as a “Single” set. I have three that have both a Philadelphia and a Denver set of coins, or a double set. I bought these back in the early 1970s. They came in a brown envelope like the Proof set of that era. Was there both a single and a double set issued that year?

The U.S. Mint’s 1959 Uncirculated Mint set contains two sets of coins: one a complete set of each circulation-quality denomination struck at the Philadelphia Mint, the other, at the Denver Mint.

The total face value amount of the coins in the 1959 Mint set is $1.82, consisting of two half dollars, two quarter dollars, two dimes, two 5-cent coins and two cents. The original issue price was $2.40.

This configuration, with an example of one circulation-quality coin from each Mint, has more or less stayed the same to the present day, although some anomalies have occurred through the years.

There are the “Special Mint sets” of the 1965 to 1967 era, which contain one example of each circulating coin, with a special finish, but none bearing Mint marks.

As well, in 1982 and 1983, the Mint did not issue Uncirculated Mint sets at all, but did offer over-the-counter sales of what were termed “Souvenir Mint sets” at the Philadelphia and Denver Mint gift shops.

Uncirculated Mint sets issued prior to 1959 (listed as “Double Sets” in Coin World’s Coin Values), contain two of each Mint’s circulation-quality coins — for instance, two D Mint mark half dollars from the Denver Mint, two Philadelphia Mint strike half dollars (which did not have a Mint mark), and so forth. In contrast to the 1959 Mint set, a 1958 Mint set contains coins with a face value of $3.64 and was originally sold for $4.43.

The 1959 Uncirculated Mint sets also featured the use of pliofilm (clear plastic) packaging for the first time, similar to what was used only for Proof coins up to that point.

Previous Uncirculated Mint sets had their coins packaged in flat, pre-cut cardboard holders, which often led to a generous amount of toning not seen on coins in later Mint sets with pliofilm packaging. Judging from their values, collectors are often willing to pay a substantial premium for pre-1959 Mint sets in their original packaging.