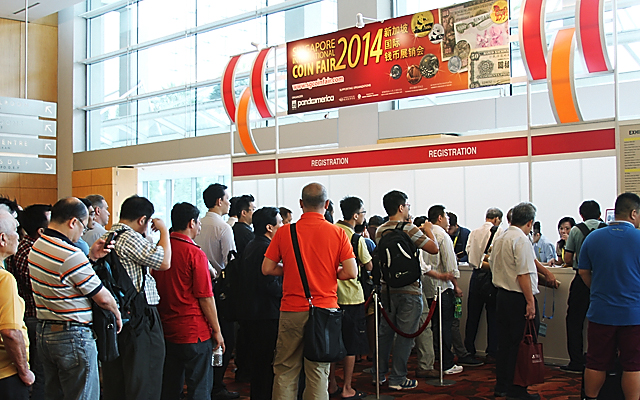 A long line of collectors gathers at the entrance of the Singapore International Coin Fair. 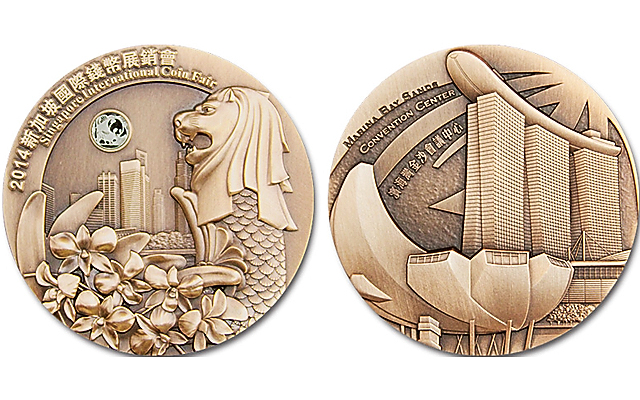 A commemorative medal was issued for the show and was available in two versions, the copper example shown here and a silver version.

Organizers of the 2014 Singapore International Coin Fair call it “an unqualified success.”

The show, which was held from March 28 to 30 at the Marina Bay Sands Expo & Convention Center in Singapore, attracted nearly 10,000 visitors, with long lines forming before the doors opened, according to representatives of PandaAmerica, the U.S. firm that organized the show for the fourth year.

Business for the more than 100 different dealers and mints from 25 different countries in attendance was so busy that the show hours were extended, the firm said.

A limited edition medal, available in copper or silver, was issued to commemorate the show. The obverse of each medal shows the Marina Bay Sands, site of the show. Singapore’s city skyline, among other elements, appears on the reverse.

In addition, the Austrian Mint displayed the Philharmonic 1,000-ounce (68 pounds) .9999 fine gold €1,000 coin dubbed “Big Phil,” the first time a coin this big has been in Singapore, according to show organizers.

Many show attendees stopped to pose with the giant coin, which has a metal value equivalent to $1.35 million U.S.

Singapore-based financial investor/television personality Jim Rogers attended the show to highlight numismatics and investments, participating in the official ribbon-cutting ceremony. Rocky Zhao, the artist and designer of the 2011 and 2014 Chinese Panda coin, was a featured guest, meeting with attendees and signing autographs.