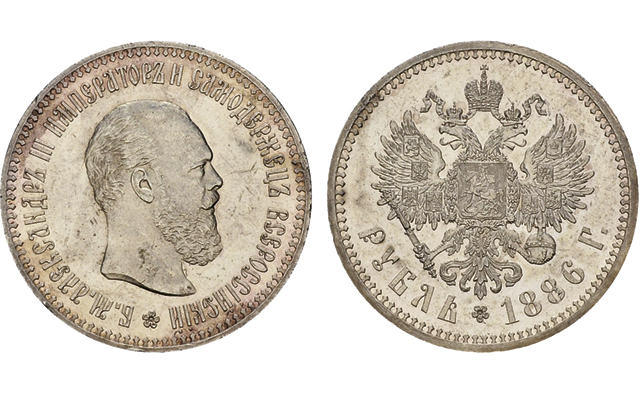 A pattern ruble from 1886, struck for emperor Alexander III, was one of two highlights selling for $1.56 million U.S. in Sincona AG’s Oct. 13 auction of the third part of a landmark collection of Russian coins. 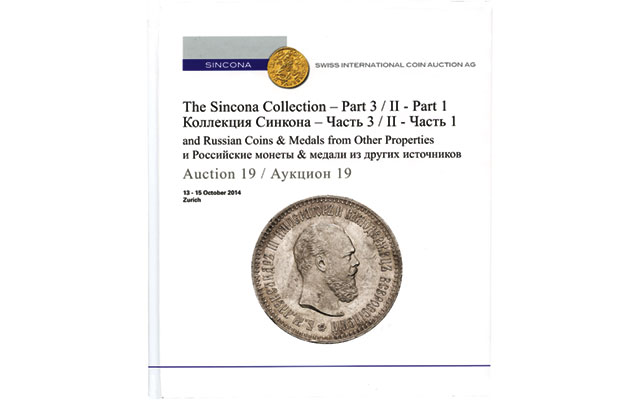 The cover of the third part of the Sincona Collection of Russian coins and medals highlights the 1886 portrait ruble pattern that was one of the top lots in the sale. 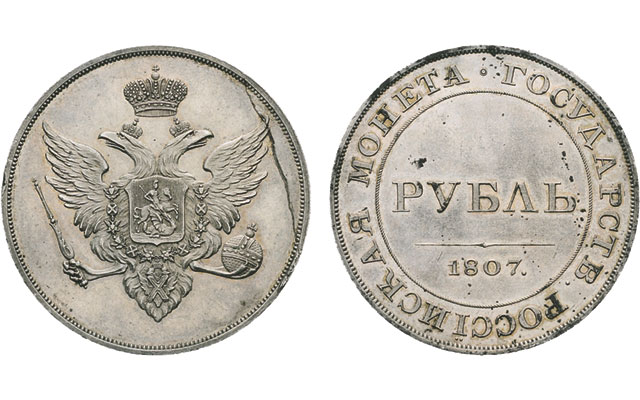 A pattern ruble from 1807 is the only one with a smooth edge and one of only two examples known (a lettered edge example is in the Hermitage Museum). This coin realized $1.56 million U.S. in an Oct. 13 auction.

Could the secret to the sweet success experienced by Swiss International Coin Auction (Sincona AG), as it has sold three parts of a landmark collection of Russian coins, lie in the chocolate replicas of highlights in its auctions?

What other auction house creates candy calling cards of its best pieces?

Sincona has had confectionery coins, showing obverse designs from a few highlights of its Russian coin auctions, distributed at coin shows in Moscow and during the auction.

The firm’s Russian numismatic expert, Vadim Shiryaev, knows better than to credit success to the confectionery coins. Instead, he highlights the strength of the collection, and the firm’s efforts to publicize the auctions months in advance.

“After one auction we begin to advertise the coins in the next auction,” he said. “Collectors of serious coins do not buy anything else during the year because they know what will be in our next auction. It will be clear from March what they’ll [budget] for the whole year.”

The strategy seems to work for the four-year-old company, as two highlights in the firm’s latest installment of the collection each realized 1,495,000 Swiss francs ($1,561,110 in U.S. funds) on Oct. 13, including the 15 percent buyer’s fee.

The top lots were an 1886 silver ruble pattern and an 1807 ruble pattern, both struck at the St. Petersburg Mint. The 1807 pattern in the auction is one of two examples known, with the piece in the sale bearing a smooth edge and the other piece, housed in the Hermitage, bearing a lettered edge. (Earlier coverage of the 1886 pattern and other highlights appears in the October monthly edition of Coin World and online at www.coinworld.com.)

Two different collectors purchased the two patterns mentioned, which were offered along with many other highlights. The latest installment realized an estimated 12,650,000 Swiss francs ($13,209,400 U.S.), with the buyer’s fee added.

Combined, all three parts have realized the equivalent of an estimated $38.7 million U.S., making the auction one of the most (if not the most) successful for a collection of non-U.S. material, of all time, with one more auction scheduled.

The firm is located in Zurich, long a center of international finance and wealth. The auction house was formed in 2011 as UBS shuttered its coin department and several employees formed their own entity for both auctions and direct sales.

Location is one key to the auction house’s strategy, Shiryaev said.

“The market in Russia [for Russian rarities] will continue to be weak,” he said. “Really good coins must be sold through our auctions. Our auctions draw all the serious money from the Russian coin market, from Europe, Russia, America and around the world. Sincona is as big as the whole rest of the world Russian coins market.”

Shiryaev said the firm has attended coin shows in Russia to share highlights of the auction, and has cooperated with I.R. Shiryakov, head of numismatics at the State Historic Museum in Moscow, to provide research about many pieces in the auctions that were never explored in depth before. This year those efforts included a presentation during the Coins-2014 International Coin Conference in Moscow. The firm published a video of that presentation through YouTube.

“We try to make numismatic information available to all — this fosters interest in coins that previously were unknown or incorrectly cataloged, creating a market for these items,” Shiryaev said. He also touted the firm’s ability to work with collectors without the need for other dealers as middlemen.

And the most astonishing part of Sincona’s success with the Russian collection is that, so far, it has only included one gold coin.

Though the collection was originally slated to be sold in just three parts, a fourth auction is now scheduled for 2015.

The collection was built during first 15 to 20 years after World War II by one person (who died decades ago). That collecting feat that would be “impractical today,”according to Shiryakov, writing in an essay in the front of the catalog.

Five coins from the collection have sold for the equivalent of $1 million U.S. or more apiece, with two of those topping $2.5 million U.S.

The Sincona Collection includes practically all copper and silver coins from 1700 through 1917. For all its depth it lacks the series of common 5-kopek coins of Catherine II. That’s about the only thing missing, Shiryaev said.

Auctions aren’t the only venue where pieces from the famous collection may appear, Shiryaev said. “It does not mean at all, that this consignment is the whole collection and the last consignment.”

The consignor is “very satisfied with the results of our auctions” and may continue selling coins, medals, orders, decorations and other pieces through the firm in the future.

The final offering of the 2012 consignment that was dubbed The Sincona Collection will be offered in October 2015, with a preliminary catalog of images and descriptions available in March 2015.

And then, more chocolate “coins” can’t be too far behind.