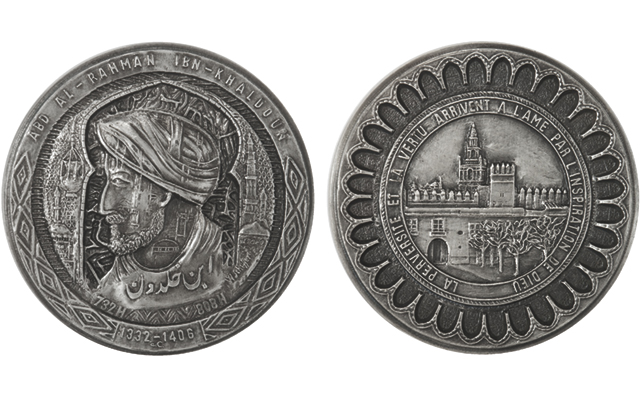 The obverse of this 82-millimeter silverplate medal is dominated by the portrait of historian and philosopher Ibn Khaldun.

A bearded bust of a man in turban identified as ABD AL-RAHMAN IBN-KHALDOUN dominates the obverse of an 82-millimeter copper silverplate medal of the Paris Mint’s Club Français de la Médaille from 1979. Only 100 numbered examples were struck, with unlimited 77-millimeter bronze versions struck for general sale.

Designed by Slovak-born sculptor William Schiffer, the bust is identified as IBN KHALDUN in Arabic at the shoulder and in French near the upper rim. Spanning the Arab and Western worlds, the design gives its subject’s vital dates in two calendars: birth in the year 732 A.H. according to the Hijjra Islamic calendar, and A.D. 1332 in the Western system; and death in 808 A.H., which is A.D. 1406

The bust is placed in a recessed gateway surrounded by towers, domes and textured fields.

An arched colonnade forms the reverse border around a view of medieval Seville with the cathedral and Giralda tower (once a mosque and minaret).

Though born in Tunis, historian and philosopher Ibn Khaldun (modern English spelling) lived in al-Andalus (Islamic-ruled Spain) as a youth while his father served as an ambassador. His writings were composed as his political involvement bounced him from Andalusia to Morocco, Tunis, Egypt and Mecca.

His parents died when the Black Death swept Spain, and he began deep philosophical writings, including his Muqaddimah, an introduction to world history. He believed in a historic rhythm in which warlike barbarians were transformed into effete city dwellers, only to be conquered by the next wave of invaders.

This idea was reinforced by his failed mission for the Sultan of Egypt to induce conqueror Tamerlane not to destroy the great city of Damascus.

Ibn Khaldun is regarded today as father of Arab historiography, the “history of history.”

Islamic portrait medals are few, thanks to strictures against representational art. In our time, the Afghan Taliban highlighted this by threatening sculptors and blowing up the Great Buddhas of Banyan. Rebirth of the medal in the Italian Renaissance happened when Islamic coinages featured ornamental calligraphy for designs.

European mints created 19th century portrait medals for state visits of Persian Shah Nasr ud-Din and Ottoman Sultan Abdul Mejid, and after World War I, portrait coins were struck for Egypt and Iraq; in Persia, portraits were common, as such art did not offend Shi’ite religious sensibilities.