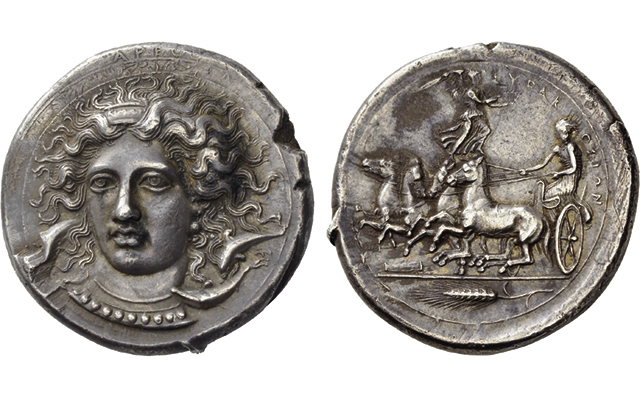 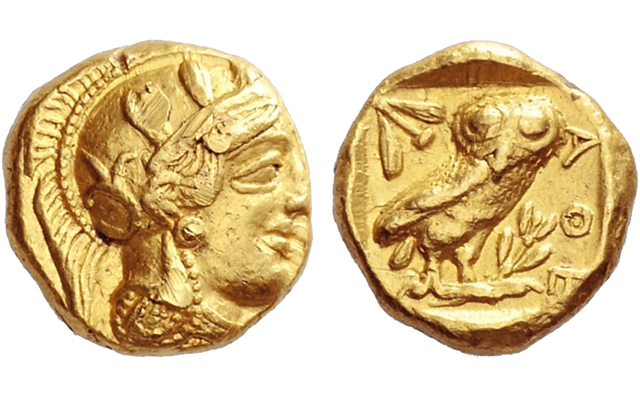 This circa 407 to 404 B.C. gold didrachm of Athens, only the fifth example known, realized 565,250 Swiss francs, or about $631,183 U.S. The coin is from a series struck from gold removed from statues of Nike at the Temple of Athena Nike at the Acropolis in Athens.

A silver tetradrachm of Syracuse, Sicily, sold May 26 in Zurich established, barely, a new record price for a Greek silver coin at auction.

The coin’s price edged out the earlier record price, paid for a circa 409 to 406 B.C. decadrachm of Agrigentum, another seaside city-state in Sicily, set in a sale by the same firm in its auction No. 66 on Oct. 17, 2012.

Each coin had a hammer price of 2.3 million Swiss francs, but the buyer’s fee is now 19 percent, compared to 18 percent in the earlier auction. At the exchange rate of the time in 2012, the Agrigentum coin sold for the equivalent of $2,918,810 U.S.

The tetradrachm of Kimon is “the greatest masterpiece of Greek numismatic art and work of the most talented master-engraver of the period,” according to the auction house, which also described it as “the most beautiful Greek coin in private hands.”

Designs of a legend

The coin shows a facing-head view of Arethusa “the Saviour,” the water nymph, on the obverse, with playful dolphins darting through her floating strands of hair. Her headband bears the artist’s name.

Her appearance on the obverse temporarily reversed a century of practice that placed her on the reverse. According to Numismatic Ars Classica, the side depicting Arethusa may have been used as the reverse all that time to prevent damage to the reverse die; due to the method of striking coins used in ancient times, one die absorbed more of the force from the hammer blow, which could result in damage, including die cracks.

The reverse of the coin shows a victorious charioteer driving a quadriga, with Nike floating above, reaching out to crown the driver.

Katherine Erhart, in a dissertation on facing head Greek coins cited by the auction house, praised the design, calling it “easily the most beautiful coin of all time, one applauded by ancient die-engravers and modern critics alike. ... No other engraver before or since has so magnificently exploited the compositional potential of the small circular coin flan.”

Facing-head portrait coins seldom were issued in Western Greece, and all of the facing head portraits of Sicily are considered masterpieces.

After Kimon’s coins with facing head portraits, the portrait of Arethusa on tetradrachms struck at Syracuse reverted to showing her in profile on the coins’ reverse. It wasn’t until toward the end of the fourth century that the head became the obverse, in keeping with other Greek mints of the era.

Four dies were used to create the facing head Arethusa tetradrachm, two dies each for the obverse and reverse, and three of the four were signed by Kimon.

Both obverses were used with both reverses, and none of the four dies was used with any other die — all evidence that this was a stand-alone series made for a special occasion.

The combination of the various design motifs with the “innovative and remarkable quality of the dies, earmarks this as a commemorative issue.”

Writing in the catalog foreword, Arturo Russo, the principle of Numismatic Ars Classica, said that the facing head Arethusa tetradrachm “no doubt caused quite a stir at the time of its circulation judging from the number of later issues of other mints that it had clearly inspired.”

Researchers suggest it is associated with the defeat of the Athenian fleet at Syracuse in 413 B.C. or with the good fate of the Syracusans in the otherwise devastating Carthaginian invasion of Sicily in 406 to 405 B.C.

The tetradrachm in this auction is struck in high relief on a very broad planchet or flan, and perfectly centered. It is graded Good Extremely Fine by the auction firm.

Walsh, using a dealer agent, reportedly purchased the coin, from the collection of Robert Käppeli, during the Oct. 27, 1999, auction by Leu Numismatics.

In that 1999 auction the coin realized 494,500 Swiss francs, including the 15 percent buyer’s fee, for a total price then equivalent to $326,942 U.S. At the time it was one of the highest prices paid for a Greek coin, according to Nomos AG’s Alan Walker, who was then at Leu.

Another highlight from the Walsh sale is a gold didrachm, or stater, of Athens fashioned from metal “harvested” at the Acropolis.

The coin was issued late in the Peloponnesian War, when Athens was besieged by Spartans and their allies. Amid bankruptcy, starvation and plague, the Athenians stripped the plating from seven of the eight statues of Nike at the temple of Athena Nike, and converted it into gold coins, including the example offered here.

Russo said one American collector said the Athenian destruction of the statues was as shocking as if an American burned the Declaration of Independence.

The Athenians turned to the gold-covered statues of Nike, which had become emblems of the city’s great economic reserves. These emergency funds were tapped into to build and outfit a new fleet of ships that in 405 B.C. was defeated by the Spartan general Lysander, who then forced the city to surrender in the spring of 404, bringing an end to the Peloponnesian War.

Only a handful of these gold coins survive today, suggesting that almost every piece was secreted away and eventually was consigned to the melting pot.

The gold didrachm in the Walsh Collection has a “minor” scuff on the obverse, but is otherwise About Extremely Fine.

The auction catalog and full results may be viewed at the firm's website.

Email the business at zurich@arsclassicacoins.com.