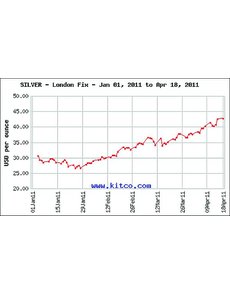 Chart illustrates movement of the price of silver from January to mid-April 2011. The latest price of approximately $45 is a near record. 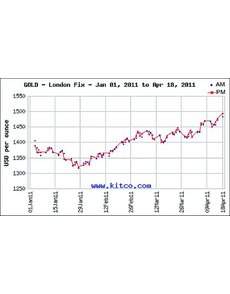 Chart illustrates movement of the price of gold from January to mid-April 2011. The current price of more than $1,500 is an all-time high.

Silver continues to sprint toward to its 1980 high of more than $50 an ounce while gold has expanded on its record, breaking the $1,500 an ounce barrier.

The rapid rise in precious metals in the past year has led some hobbyists to question how much higher prices can climb before they recede.

On April 20, gold closed at $1,503 an ounce after reaching a high of $1,507.10 during the day’s trading in New York. Silver closed at $45.25 an ounce after trading at $45.43 in New York. The prices reflect that more investors seem to be banking on precious metals as a safe haven investment in times of fluctuating national currencies.

The rise in the price of gold has been steady, while silver’s jump has been incredibly steep, rising more than 250 percent in value in the past year. The ratio of gold to silver — the number of ounces of silver needed to buy one ounce of gold — fell to 34, a level not seen since 1983.

Concerns in U.S. and globally

Commodities continue to experience strong demand with many commodities seeing multi-year highs, including crude oil, which is currently trading above $110 a barrel. Some look at rising commodity prices as a lead indicator of future inflation or a weakening of the purchasing power of the dollar.

Concern about inflation continues be at the forefront of investors’ minds, and the U.S. dollar index has recently seen one-year lows. An unexpected April 19 announcement that Standard & Poors rating agency would downgrade the U.S. government’s debt from stable to negative made the U.S. dollar appear to be a less-safe place to hold wealth. With the weakening dollar, the euro reached a 15-month high against the dollar April 20.

Globally, several European countries including Greece, Ireland, Portugal and Spain continue to have troubles managing their debt, and there is continued worry that unrest in the Middle East and North Africa will disrupt the global oil supply.

Will it move up or down?

While gold production has increased in the past year according to GFMS, a precious metals research consultancy that produces supply and demand data on the gold market, demand has far outpaced supply in the past year. Additionally, the supply of scrap gold has dwindled as eager sellers have already sold and those without any urgency to sell and investors are holding on to their gold in anticipation of even higher prices.

At the start of the year, GFMS predicted that gold could rise above $1,600 by the end of 2011, and 24 analysts polled by the London Bullion Market Association predicted a peak of $1,632 this year.

Yet, not everyone is so bullish. Morningstar, an independent investment research firm that analyzes markets, noted in an April 20 report, “Tailwinds ultimately turn into headwinds.” The report suggested that bullion-backed Exchange Traded Funds, growing retail demand from emerging markets and central banks switching from being net sellers to net buyers of gold are all not enough to maintain sustained interest in gold at the $1,500 level.

On April 7, Morningstar issued a report with a long-term gold price forecast of $1,100 an ounce. ¦