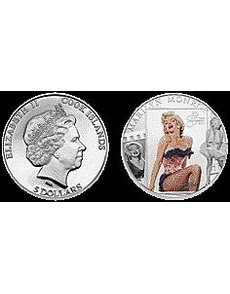 Marilyn Monroe, a diamond of the silver screen, has been commemorated on new noncirculating legal tender collector coins, one of which features a diamond.

Late in 2011, the Cook Islands, through private issuer Coin Invest Trust, released two colorful coins celebrating the famous sex symbol, to mark what would have been her 85th birthday (June 1, 1926).

Born Norma Jeane Mortenson and baptized and raised Norma Jeane Baker, she became Marilyn Monroe in 1946 before launching her career on screen (she legally changed the name 10 years later).

After smaller roles, her stardom grew and she began taking starring roles as a “dumb blonde” in films like Gentleman Prefer Blondes and The Seven Year Itch. Other notable starring turns include Some Like it Hot and her final completed film, The Misfits.

Nearly 50 years since her controversial death at the age of 36 on Aug. 5, 1962, Monroe remains an iconic figure in popular culture, and is the subject of a current movie, My Week With Marilyn, set during filming of The Prince and the Showgirl, which also starred Laurence Olivier, and the focus of a new Nathan Heller historical mystery novel, Bye Bye, Baby.

Three distinct images of the ebullient Hollywood legend grace the reverse of a prooflike silver-plated copper-nickel dollar coin and a Proof .925 fine silver $5 coin, the latter coin including a diamond inserted where her earring appears on her left ear in the central image.

The famous image of Monroe in a wind-blown white dress above a subway grate in New York City, from The Seven Year Itch, appears at far right. Another image, depicted as a film still, appears at far left.

Both coins measure 38.61 millimeters in diameter; the prooflike dollar coin weighs 27 grams, while the Proof $5 coin weighs 25 grams. The mintage limit of the dollar coin is 2,011 pieces, with the mintage set to 1,926 (her birth year) for the $5 coin.