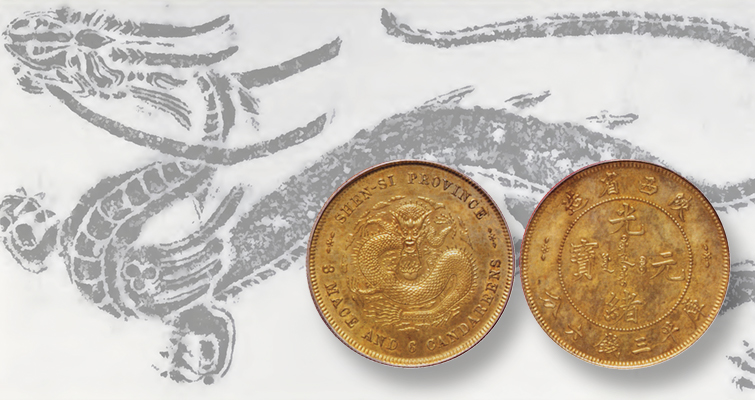 What possible explanation is there for a silver coin issued in a province that didn’t have a mint and rarely used silver in commerce?

An undated (1898) silver 50-cent pattern from Shensi, China, was struck at the Heaton Mint in Birmingham, England, but determining the origin of the mysterious coin took decades.

An example of the pattern, graded Specimen 61 by Professional Coin Grading Service, highlights Champion Coin Auctions’ Dec. 6 sale at the Sofitel Macau at Ponte 16. The auction caps the Macau Numismatic Society International Show, on tap from Dec. 3 to 6.

Eduard Kann, writing in his opus Illustrated Catalog of Chinese Coins (Gold, Silver, Nickel & Aluminum), notes that the Hupeh Mint was credited with producing these early patterns for Shensi (also noted as Shen-si). However, Shensi was a poor province that used almost exclusively the bronze, low value coin known as the cash. Shensi “was hardly in need of silver dollars as unit of money, a coin which in the beginning was very unpopular in the outlying provinces.”

Early research dated the coins to the 1920s (because Shensi obtained its own mint in 1924).

In the mid-1970s, the Heaton Mint, in business since 1850, was sold and duplicates from its collection of examples it had struck soon entered the market. Among the coins released at that time were a number of Shensi dragon coins. Kann had suggested the coins were made as early as 1898, and their existence in the Heaton collection supports that potential production date.

According to Bruce Smith, writing in the Champion catalog, “Hundreds of coins from various countries, struck by Heaton’s over the previous century, went to the British coin firm Spink’s, or perhaps a combination of Spink’s and the American firm, Paramount,” Smith wrote. “These two companies began marketing the coins in 1975.”

Most of the genuine Shensi pattern coins on the market are Proof strikes. Many counterfeits exist, having been made for collectors since before World War II. The authenticated example in the Champion auction has a pre-sale estimate of $120,000 to $260,000 U.S.