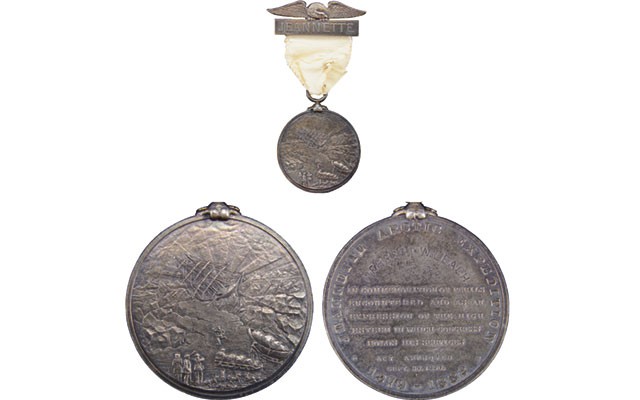 Silver medal was presented to Herbert W. Leach as a survivor of the 1879 Arctic Expedition aboard the Jeannette.

A 1.5-inch silver medal congressionally authorized to Herbert W. Leach, a survivor of the ill-fated Jeannette Arctic Expedition of 1879, is being offered in James D. Julia Inc.’s Feb. 4 to 6  sale.

The medal depicts on its obverse an Arctic scene with men on shore and an ice-crushed ship in the distance. On the reverse, inscribed around the top border, is JEANNETTE ARCTIC EXPEDITION 1879-1882.

Below is inscribed TO / HERBERT W.LEACH. / IN COMMEMORATION OF PERILS / ENCOUNTERED AND AS AN / EXPRESSION OF THE HIGH / ESTEEM IN WHICH CONGRESS / HOLDS HIS SERVICES / ACT APPROVED / SEPT. 30. 1890.

The medal is holed and looped and suspended from a ivory-colored ribbon attached to an eagle-topped clasp inscribed JEANNETTE.

According to R.W. Julian in Medals of the United States Mint: The First Century 1792-1892, the Jeannette medal is cataloged as Julian NA-27.

Although the award was authorized by Congress on Sept. 30, 1890, the Navy Department took until April 6, 1892, to forward approved obverse and reverse designs for the medal to be struck at the Philadelphia Mint.

The Navy Department, according to Julian, “ordered eight gold and twenty-five silver medals — one medal to survivors and one medal each to families of the deceased.”

Under the command of  Lt. Commander George Washington DeLong, the Jeannette, a former British Navy gun vessel, left San Francisco on July 8, 1879, but became trapped in pack-ice off Herald Island. By June 13, 1881, the vessel had drifted close to the New Siberian Islands, off the northern coast of Russia.

Having abandoned the three-masted Jeannette on June 12 as it was being crushed by the ice, the vessel’s crew split into three groups in hopes of finding civilization. The crew consisted of 30 officers and men, and three civilians.

Three smaller boats that had been tethered to the Jeannette departed in search of the mainland. A storm hit and capsized one of the boats carrying eight crewmen. The remaining two boats with a combined 25 men continued.

One group, which included Leach, was under the guidance of Chief Engineer George Melville and managed to reach a small inhabited village on the delta of the Lena River.

DeLong's group landed elsewhere. DeLong and all but two of his group perished. Their remains were eventually returned to the United States. The two survivors from DeLong's group met up with the 11 from Melville's group.

The story of the Jeannette was first recounted in the 1882 book Our Lost Explorers: The Narrative of the Jeannette Arctic Expedition. The story is also told in author Hampton Sides' 2014 work, In The Kingdom Of Ice.

The expedition was funded by James Gordon Bennett of the New York Herald.