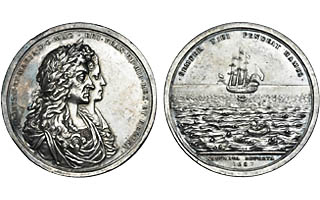 A silver medal from 1687 celebrates the successful recovery of treasure from the 1641 wreck of the Nuestra Señora de la Pura y Limpia Concepción. The medal is for sale in an April 2 and 3 auction in London.

When a fortune in silver sank on a Spanish galleon in the waters of the Turks and Caicos Islands in 1641, more than four decades passed before any treasure was recovered.

A silver medal commemorating the successful recovery of some of the treasure is part of Dix Noonan Webb’s April 2 and 3 auction in London.

The Good Very Fine medal from 1687 honors the work of the American, Sir William Phipps, who led the mission to recover the valuables from the wreck of the Nuestra Señora de la Pura y Limpia Concepción, which had set sail from Havana (Cuba) on its way back to Spain.

Lured by the estimated 1 million to 4 million pesos in silver coinage aboard, as well as gold, pearls and more, the Duke of Albermarle financed the mission, according to National Geographic. Phipps was successful, recovering some £300,000 of the treasure and receiving £16,000 for his find, according to Dix Noonan Webb.

But Phipps could not find all the treasure – after facing hostile weather and low on supplies, he abandoned the efforts. He returned later, but found other salvors working the site, according to National Geographic.

Over the years, several treasure seekers have returned to the site with some success, according to National Geographic.

Thanks to the treasure, the area is known as the Silver Banks.

The medal celebrating the 1687 recovery shows the then-reigning English monarchs, James II and Mary of Modena, on the obverse. Two tiny rowboats appear in the scene on the reverse, one almost lost among the waves at the bottom of the design. The Algier Rose (Phipps’ ship) dominates the center of the design. The medal, which measures 55 millimeters in diameter, has a few rim knocks and is “somewhat scuffed.”