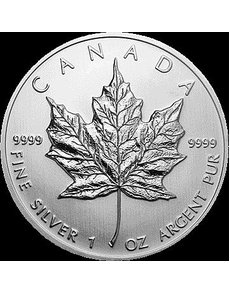 The standard Maple Leaf silver bullion coins from 1988 to 2013 feature a plain field. 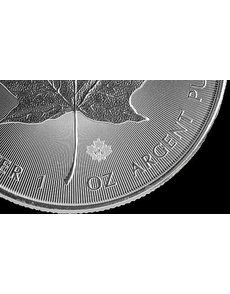 A closer look at the laser mark maple leaf that is now being used for 2014 Maple Leaf silver bullion coins. The numeral 14 appears inside the leaf, and will change annually. 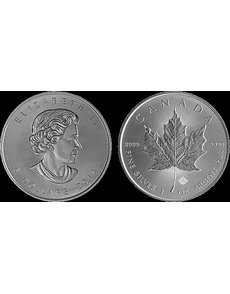 One of the world’s most popular silver bullion coins is getting an upgrade.

The Royal Canadian Mint announced Dec. 4 that 2014 Maple Leaf 1-ounce .9999 fine silver $5 bullion coins will include a new “radial line finish” and a micro-engraved laser mark. These updates will be permanent additions to the RCM’s flagship silver bullion coin.

The radial lines on the fields of 2014 Maple Leaf silver coins were precisely machined to within microns on the master tooling to ensure consistent die production and coin striking, according to the RCM.

The specific width and pitch of the lines radiating from the coin’s central design motifs create a light-diffracting pattern that is unique to the RCM’s “next generation” silver Maple Leaf.

The coins also feature a micro-engraving, produced by laser, of a textured maple leaf incorporating the numeral “14” to denote the coin’s year of issue. The numeral will change annually to reflect the current date. The maple laser mark appears on the reverse of the coin, to the right of a maple leaf stem.

The laser mark is derived from security technology applied to Canada’s 2012 $1 and $2 circulation coins. The laser mark is similar to that employed for the RCM’s Maple Leaf 1-ounce .9999 fine gold $50 bullion coin beginning in 2013 as the RCM extended the application of its Digital Non-Reactive Activation technology. For the Maple Leaf coins, the mark certifies that it was struck by a genuine Mint die of record. Each mark will differ minutely from another, according to Alex Reeves, senior manager of communications at the RCM.

According to the Royal Canadian Mint, only the RCM currently has the capability to use the security mark for authentication.

He would not disclose any future plans to make readers available or even discuss where such readers are in use now for the gold Maple Leafs and $1 and $2 coins, or if they are in use outside the RCM.

“For the moment, the mark on the [silver Maple Leaf] and the radial finish help visually authenticate genuine coins as both are extremely complex,” Reeves said.

“Counterfeiting is a risk all coin manufacturers have to manage. By introducing this new layer of security to the [silver Maple Leaf], we are proactively managing the risk before it ever becomes a problem.”

Delivery of 2014 Maple Leaf silver bullion coins to the RCM’s network of distributors began during the first week of December.

As with other world mints, the RCM does not sell bullion coins directly to the public but uses a system of distributors who buy and sell the coins to create a tiered market.

The silver Maple Leaf is the second-most popular 1-ounce size silver bullion coin in the world based on annual sales, behind the American Eagle silver coin.

Canada’s Maple Leaf coins depict a Walter Ott image of a maple leaf on the reverse, with the Susanna Blunt effigy of Queen Elizabeth II on the obverse. ¦