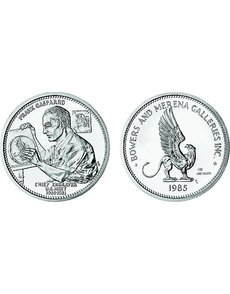 In 1985, Bowers and Merena Galleries commissioned retired Chief Engraver Frank Gasparro to create a series of 1-ounce .999 pure silver medals of his own designs. “How about making one depicting yourself?” he was asked. The result for this particular version is shown here. How many survive today in light of the massive meltings of silver pieces since 1985?

Silver mania is rampant! All of a sudden — well, almost — in the span of a few short years, the price of silver has risen from $5 to $6 per ounce to more than $40. It has become a speculative medium — perhaps not quite like tulip bulbs, but not unrelated either.

For many years silver was integral to the U.S. coinage system. The first U.S. pattern coins dated 1783 were mostly of silver. The first federal coins made for circulation by the government were the 1792 silver half dismes struck in Philadelphia a few months before the Mint was ready.

Beginning in 1794, and continuing until 1964, silver was employed to make multiple denominations.

By 1964, a shortage of silver bullion and rising prices precluded its further use. Later coins have been commemorative and bullion coins, not used as money but sold at a premium.

In 1964 there was a fear that the silver price rise would be short-lived. Quite a bit was written to counter this, including that the main use of silver was in making photographic prints, and that was a dynamic business. Then there was jewelry. Further, in India in particular, silver was held as an investment.

Still, interest in silver endured — for jewelry, for use in certain electrical products, and, increasingly, for investment. Soon, the investment tail was wagging the commercial-use dog. Prior to 1964 the price was pegged at $1.27 per ounce — for generations. No one thought of investing in the metal.

With the price free floating and rising in the mid-1960s, investing became important. So did the production of silver medals, such as by the Franklin Mint, various art medals (one from the Bowers and Merena series by Frank Gasparro is illustrated), and silver “rounds.”

Then in the late 1970s, the Hunt brothers in Dallas attempted to corner the silver bullion market, the price went up and up, to nearly $50, and millions of coins, art medals and the like were melted. Then the price crashed. Now it is up again.

One negative is that lightly worn 20th century silver coins, once collectible at low cost, have been melted in quantity, while the remaining ones are expensive.

I do like to watch out for my Coin World readers.