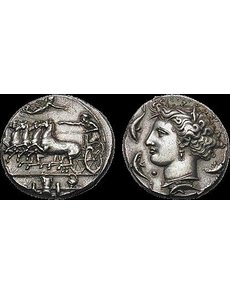 A circa 400 to 370 B.C. silver decadrachm of Syracuse, Sicily in ancient Greece, one of five examples from the same pair of dies, led all bidding during Gemini Numismatic Auctions’ Jan. 8 auction.

The coin, which is in choice Extremely Fine condition, realized $138,000.

Harlan J. Berk Ltd. and B&H Kreindler are parties in the joint venture conducting the auction.

All successful bids are subject to an 18 percent buyer’s fee, with a discount to 15 percent for certain payment methods. The 15 percent fee is reflected in totals and prices here.

Roman Empire, Uranius Antoninus, circa A.D. 253 to 254 gold aureus, commemorating the games held by Philip I in honor of the millennium of Rome, “apparently the fourth recorded specimen of one of the more interesting types,” Near Mint State, $92,000.