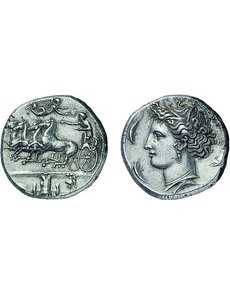 A circa 400 B.C. silver decadrachm of Sicily, attributed to the famed diesinker Euianetos, highlights Gorny and Mosch’s auction week Oct. 10 to 14.

Kicking off the “auction week” are 895 lots of “Ancient Coins of High Quality,” subject of sale No. 199 on Oct. 10. These coins have combined estimates of more than €2 million.

The focus is on Greek coinages, with coins of Syracuse depicting the head of Arethusa leading the way. One of the highlights is the circa 400 B.C. silver decadrachm of Sicily, signed by the famed ancient die sinker Euainetos, one of a small number of antiquity’s medallic sculptors whose names survive today.

The Euainetos decadrachm one of the most celebrated and admired coins of all antiquity. The obverse design is of a charioteer driving a chariot with four horses, with goddess of victory Nike flying above the scene. The reverse depicts Arethusa, the water nymph.

In addition to coinage highlights (like a run of coins from Macedonia and Thessaly, a series of Syrian tetradrachms, and an array of coins of the rulers Lysimachos and Alexander), the auction also features some Archaic works of art, statues of antiquity.

The collector of Roman coins will spot rarities, too, whether Republican or Imperial issues, with “truly rare” Byzantine coins rounding out sale No. 199.

Byzantine offerings include the third specimen known of a solidus from Alexandria issued under the ruler Justinian, as well as a rare circa 742 to 743 gold solidus of the Armenian Artavasdus, who managed to ascend to the imperial throne for a short period of time.

The firm’s second auction, No. 200, offers 2,367 lots of ancient coins and more, featuring coins and lots for budgets of all sizes, a wider range than offered in auction No. 199.

Nearly half of the lots in auction No. 200 are Greek coins, with Roman Republic (120 lots) and Imperial issues (520 lots) comprising the bulk of the remainder. Byzantine and Celtic coins, as well as group lots, complete auction No. 200, which is scheduled for three days, Oct. 10 through 12

The auction features the Lily Beckmann Collection, which focuses on “a small but fine series” of gold coins of Nuremberg, including a 1698 gold 5-ducat pattern issued on the anniversary of the Treaty of Ryswik.

Later German coins are also abundant, including a whole range of imperial coins in gold and silver.

A collection of coins of the Federal Republic of Germany and the German Democratic Republic follows as part of auction 201.

The medals section includes a small series of medals by Karl Goetz and a group of creations of Nickel Milicz and his workshop. Shooting medals and cups, including nearly 100 pieces from the Tyrol, are also offered in auction No. 201.

Concluding the auction is a comprehensive range of Russian coins and medals, including a small series of jefimoks, a Russian classification for “any good-quality western silver coin” weighing 28.5 to 29 grams, even up to 32 grams, according to Randolph Zander, in The Silver Rubles & Yefimoks of Romanov Russia 1654-1915.

Complete auction catalogs can be viewed on the Internet at www.gmcoinart.de/index.php?area=auctions&content=katalog or ordered from the firm.

Live bidding is available on the Internet through www.coretech.cc.