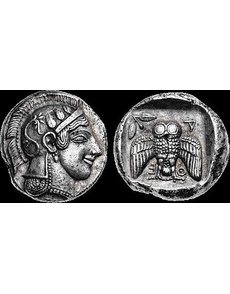 A silver decadrachm in Classical Numismatic Group’s Jan. 4 Triton XV auction provides researchers new information about the timing of production of the famed rarities from Athens.

According to the firm, the highlight of the auction is the “second known example from the earliest obverse die in the dekadrachm series,” and because it lacks evidence of re-engraving, it is the earliest example struck.

Forty-four examples of the famed ancient coin rarity have been identified by author/expert Wolfgang Fischer-Bossert, and this coin appears to match coins classified as coming from obverse die 0, the earliest example struck, according to the catalog.

The coin in the Jan. 4 auction was struck circa 469/5 to 460 B.C. and is “beautifully centered and struck with virtually complete designs on both sides, some typical minor surface roughness, [with a] flan flaw on owl.” In Extremely Fine condition, it has an estimate of $200,000.

The silver decadrachm of Athens is the highlight of the final of three catalogs the firm published for auctions scheduled during the New York International Numismatic Convention. CNG offers nearly 2,000 lots of ancient Greek, Roman, Byzantine, Celtic, Islamic and world coins in two sessions Jan. 4, in addition to other properties in other catalogs (previews of those sales may be found at www.coinworld.com).

All successful bids are subject to an 18 percent buyer’s fee, with a discount to 15 percent for certain payment and bidding methods.

Virtual catalogs may be viewed at the firm’s website, www.cngcoins.com and are accessible through www.sixbid.com; printed catalogs may be ordered from the firm for a fee.

Byzantine, Nicephorus III Botaniantes, 1078 to 1081 silver bulla of 2 solidi, 8.86 grams, “extremely rare and enigmatic type, with only one other published example of this weight class,” Lot 1648, “some minor roughness,” VF.