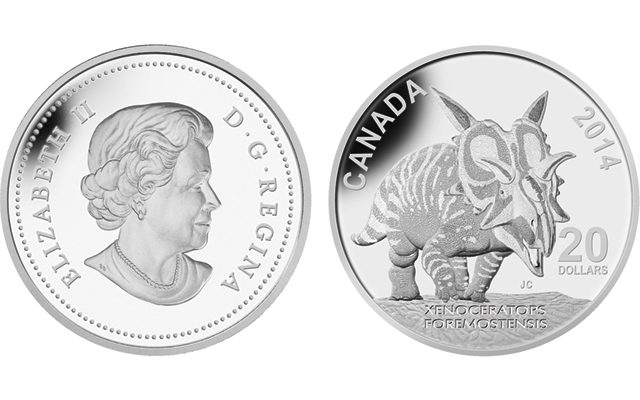 Canada’s most recent dinosaur discovery is also the most recent subject of a commemorative coin.

The Proof .9999 fine silver $20 coin, the third in the Canadian Dinosaurs series, was released July 2.

The newest discovery, the Xenoceratops foremostensis, is also the oldest species discovered in Canada.

In 2012, a team of Canadian palaeontologists led by Dr. Michael Ryan and Dr. David Evans rediscovered a series of fossils collected in 1958 from Alberta’s Foremost Formation, near the village of Foremost. Ryan and Evans also collected an additional fragmentary skull of the xenoceratops from just north of Foremost that confirmed aspects of its reconstruction.

Researchers believe this dinosaur was about the size of a rhinoceros and weighed nearly 2 tons.

An interpretation of how the dinosaur may have looked appears on the reverse of the coin, which was designed by Julius Csotonyi.

Viewed from the front on its right side, this full-body portrait presents some of xenoceratops’ most striking features, including its beak-like mouth, vast spiky skull frill, horns, large muscular body, and relatively short legs. It walks on four-clawed feet across a smooth, stony land mass, its small right eye cast upon the viewer.

The scientific accuracy of the coin’s design was verified by Ryan and Evans, according to the Royal Canadian Mint.

The Xenoceratops foremostensis has been detailed with multiple frostings accents signifying its body features and markings and creating a “pebble-textured hide.”