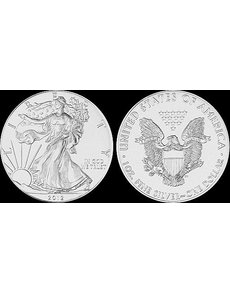 Coin for images courtesy of SilverTowne.

The United States Mint released 2012 American Eagle 1-ounce silver bullion coins in the first week of January and demand for them remains high.

As it did in 2011, the Mint is striking 2012 coins at both San Francisco and West Point Mint facilities to meet record demand. While the coins are indistinguishable, both Professional Coin Grading Service and Numismatic Guaranty Corp. are noting coins struck at the San Francisco Mint on their certification labels, provided that they are shipped to the grading service as they were shipped from the distribution center (noting their San Francisco Mint origin).

Currently, the wholesale market for San Francisco Mint issues encapsulated by either NGC or PCGS is $49 for Mint State 69 examples and $89 for those graded MS-70. Examples produced at the West Point Mint are currently trading at $42 and $78 for MS-69 and MS-70 coins.

A very slight premium is also being seen for the San Francisco Mint issues when trading in green 500-coin “monster” boxes. Dealers pay around $2.25 to $2.35 in addition to the spot price of silver per ounce to buy these coins.

At the retail level, 2012 American Eagle silver bullion coins are trading in online auctions at $42 to $45, while at shops and coin shows they are available for several dollars less. On eBay, individual MS-69 certified coins are trading at prices just below their $49 wholesale levels, while MS-70 coins are showing a broader range with recent sales concentrated in the range of $75 to $110.

Although the Mint has not indicated when it will release Proof 2012 American Eagle silver coins, the market for 1986 to 2011 issues has been stagnant so far this year, resting at the $67 level at the wholesale markets and at the $70 to $75 level in retail settings. Several market-makers in this area have expressed surprise that the current supplies have held seeing that last year’s mintage of 850,000 single Proof 2011-W American Eagle silver coins sold out as of Nov. 22.

This number did not include 100,000 additional Proof 2011-W American Eagle silver coins that were struck for the 2011 25th Anniversary American Eagle Silver Coin set. That set is currently trading at the $750 to $800 level in online auctions, recovering nicely from a low of around $600 in December of last year. ¦