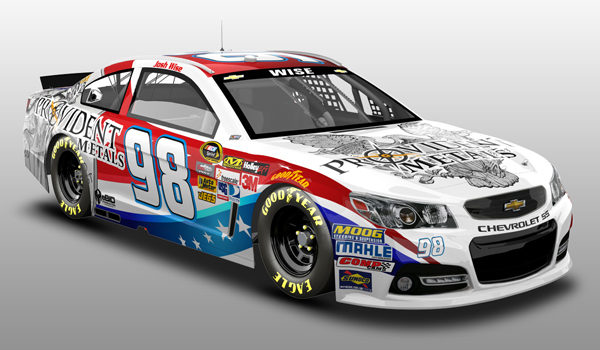 The fourth Provident Metals design for NASCAR driver Josh Wise's No. 98 Chevrolet was released this week and will be used during the Nov. 2 AAA Texas 500.

The fourth and final bullion-themed design for NASCAR driver Josh Wise’s Provident Metals sponsored No. 98 car has been released.

Provident creative director Josh Merrick emailed images of the latest design, which prominently features the silver American Eagle bullion coin and will decorate Wise’s car during the AAA Texas 500 at Texas Motor Speedway on Nov. 2, the fourth race of 2014 where Wise will have raced a Provident-sponsored car.

The hood of the car is covered with the American Eagle symbol.

"It also features the reverse of the silver eagle on the rear driver’s side, as well as the obverse liberty walking on the rear passenger side,” Merrick said.

Provident, not surprisingly, is calling the car The American Silver Eagle.

Provident sponsored the No. 98 car for races on Aug. 23, Sept. 6, Oct. 11, and Nov. 2. During each race, Wise’s car will have featured a different Provident design.

The Aug. 23 design heavily promoted the dealer’s Zombucks Currency of the Apocalypse line of bullion coins, while the Sept. 6 and Oct. 11 designs displayed both gold and silver American Eagle coins on the hood.

While the first three designs contained varying amounts of green, black and white, the final Provident design is dominated by an all-American color scheme of red, white and blue.