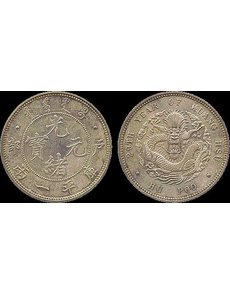 A silver 1-tael pattern issued as part of an abortive effort at a currency reform was the marquee lot of A.H. Baldwin & Sons’ April 5 Hong Kong auction, realizing $206,500 with the 18 percent buyer’s fee.

The Year 29 (1903) Hu Poo Kuang Hsu silver coin, identified as Kann 927 in Illustrated Catalog of Chinese Coins: Gold, Silver, Copper and Aluminum by Eduard Kann, was part of a series of patterns issued by the Board of Revenue in Peking (Beijing) in the void of a unifying national system at a time when provinces issued their own coins with varying weights. A uniform national silver coinage, based on a gold standard, was proposed but “there were too many Chinese interests to be placated,” never mind the “powerful foreign financial interests which were not prepared to see so vital a change as the reform of China’s currency,” according to Kann.

The auction was held in conjunction with the Hong Kong International Coin Convention and Watch Fair. Baldwin’s was an official co-sponsor with Ma Tak Wo of the auction and convention.