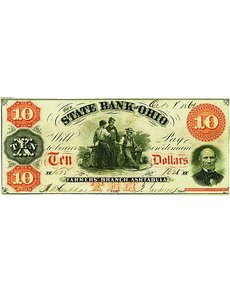 The last $10 notes issued by the State Bank of Ohio feature both a portrait and an autograph of John Andrews, bank president, who signed almost every note ($5 and above) issued by the bank’s branches for over a decade as part of his duties. Such notes are akin to autographed photographs.

Whenever most of us happen to come into contact with someone famous, there’s always the temptation to ask for an autograph.

Most of the time, you’ll end up getting one, sometimes on a picture. Believe it or not, you will find a number of opportunities to acquire an autographed picture on obsolete paper money, albeit 150 years or so after the fact.

“How’s that work?” you may be wondering. Well, it’s pretty straightforward. A number of banks decided to use the portraits of their officers on notes that they circulated. If the president or cashier was chosen to be pictured, there was a really good chance that he also personally hand signed the note, since the vast majority of such notes were signed by both officers. Thus, on those notes of this kind you have an autographed picture.

Believe it or not, some banks insisted that the president and cashier personally sign every note issued. As Hugh McCulloch, president of the large multibranch Bank of the State of Indiana and future two-time secretary of the Treasury, observed in his memoirs: “My self imposed limit was a thousand sheets (four thousand signatures) a day. For a single day, even with a name as difficult to write rapidly as mine, this would not be a hard task; but to follow it for weeks and months, as I did in the autumn of 1856, would, if it were a punishment, be too inhuman to be inflicted upon the most guilty of criminals.”

A less well known personage is Dr. John Andrews, who served as the second president of the State Bank of Ohio, which had 41 branches across the state. He was born on April 12, 1805, in Steubenville, Ohio. He studied medicine and was a practicing surgeon and physician for more than 20 years. Andrews retired from medicine, but continued other interests.

When the State Bank of Ohio was formed in 1845, he was one of the largest stockholders of the Jefferson Branch at Steubenville and served as its president.

Andrews became the second president of the State Bank of Ohio upon the retirement of Gustavus Swan on Nov. 21, 1854, and served in that capacity until his death on Nov. 14, 1866. Andrews also served on the bank’s board of control and executive committee. He, too, signed every note ($5 and larger denominations) for every branch for over a decade.

You just never know what autograph opportunities may be out there waiting for you. Take a look!