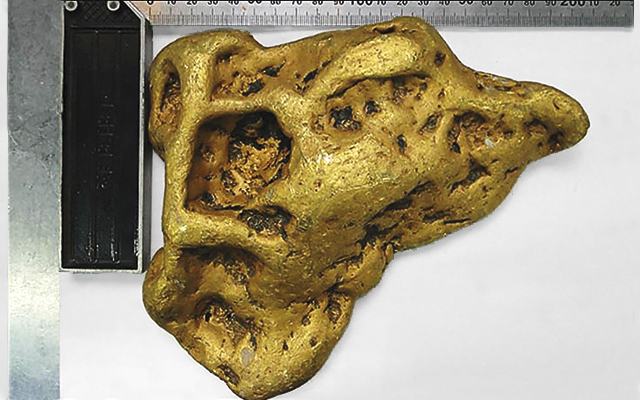 This 14.69-pound gold nugget dug up from a mine in Siberia, Russia, is the largest ever found in that region. Miners are hoping that an old saying, "one nugget never walks alone," will come true.

Image courtesy of The Siberian Times.

A large gold nugget, nicknamed the Devil’s Ear because of its peculiar shape, was found by miners in Siberia, Russia, on June 13.

The discovery of the 6.664-kilogram (14.69 pound) nugget occurred at the Ukhagan mine in the Irkutsk region’s Bodaybinsky district. Local officials say the nugget is the largest found at the mine.

A shifting machine tossed the nugget away, but a worker found it among mining debris. According to a story published June 18 in the The Siberian Times online, such finds rarely come singly and miners are hoping to find another.

“The nugget was found in a new mine that according to preliminary estimate doesn’t have that much gold,” said director of the mine, Sergey Kozlov, according to the news story.

“But the miners are very hopeful that an old saying ‘one nugget never walks alone’ will work for them again. First we will have to check the dropouts more carefully — to see what else the clever equipment threw away!”