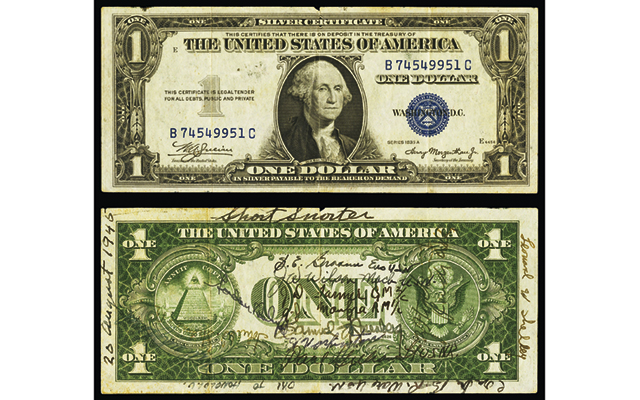 Sometimes military forces commemorated a mission by having all crew members sign a piece of paper money. The resulting item, known as a "short snorter," provided a ready-made souvenir.

Editor's note: The following is the third of a four-part Coin World series about propaganda notes prepared by Michele Orzano for the July 2014 monthly edition of Coin World.

All around the world, placing messages on paper money was a special way for military forces to create an instant souvenir. Those notess, known as short snorters, fall into the broad category of propaganda notes.

Communication is defined as the process of relaying information, and these types of notes convey a definite ‘I was there’ message.

Sometimes the messages on short snorters seem to affirm the very act of being alive and wanting to brag about it or serve as a way to remember a specific event.

A short snorter is a note signed by various persons traveling together or who met up at different events, and the note records the meeting, according to the website for The Short Snorter Project, www.shortsnorter.org. The website tells the story of the tradition, which started in the 1920s, and which once involved alcohol and IOUs. The notion of collecting such monetary remembrances spread throughout the U.S. armed forces and was particularly popular during World War II.

A Series 1935A $2 silver certificate bearing a wide variety of handwritten signatures on the back illustrates this story. This “short snorter” may well have been signed on Aug. 20, 1945, by members of a crew of a U.S. aircraft, or U.S. Navy sailors and U.S. Marines stationed aboard a U.S. Navy ship.

This note, graded by the auction firm as Very Fine-Extremely Fine, was sold for $25 on Jan. 14, 2014, by Heritage Auctions as part of a three-item lot including another $1 silver certificate “short snorter” and a 3-inch by 5-inch card autographed by former U.S. Treasurer Romana Acosta Banuelos.

“Short snorters” provide a personal connection to a time in history and are readily available. Though condition may never approach pristine, it’s the history behind the pieces that makes them interesting.