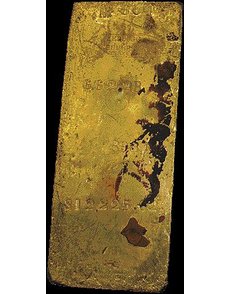 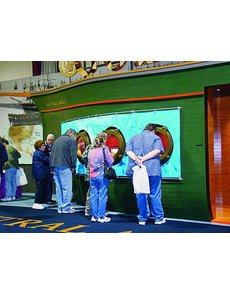 Visitors peer through portholes to see millions of dollars of SS Central America recovered sunken treasure in a 40-foot-long exhibit that resembles the “Ship of Gold’s” hull. The photo was taken at the February 2010 Long Beach Expo. The 662-ounce Kellogg & Humbert ingot shown at left is one of the large gold bars recovered from the SS Central America that will be displayed in the $10 million Ship of Gold exhibit Sept. 26 to 28.

The 25th anniversary of the discovery of the treasure-laden 1857 shipwreck SS Central America will be celebrated Sept. 26 to 28 in Long Beach, Calif., with a return voyage of the “Ship of Gold” exhibit.

The objects on exhibit will range in depth from specks of gold dust to huge gold bars that weigh more than 50 troy pounds each, including Justh & Hunter ingots weighing 754 and 652 ounces, and a Kellogg & Humbert ingot weighing 662 ounces.

The expo will also feature a multi­million dollar ANA Road Show exhibit from the American Numismatic Association Money Museum that includes examples from two of the three known classes of 1804 Draped Bust dollars.

Also to be exhibited, courtesy of Laura Sperber at Legend Numismatics and the anonymous collector who owns the coins, will be the finest Professional Coin Grading Service Registry Set of Morgan dollars.

The Ship of Gold exhibit will be anchored on the bourse floor of the convention center, courtesy of Monaco Rare Coins from Newport Beach, Calif.

The exhibit, housed in a 40-foot representation of the fated ship’s hull, last appeared at the convention in February 2010. It made its debut at the Long Beach Expo in February 2000, with return voyages in June 2000 and October 2000.

The exhibit required months of preparation to coordinate with collectors who privately own many of the items that will be displayed, according to expo organizers.

The SS Central America was carrying tons of California gold when it sank in a hurricane in September 1857 during a voyage from Panama to New York City. The shipwreck site and the gold were discovered more than 7,000 feet below the surface of the Atlantic Ocean in September 1988.

Robert D. Evans, the chief scientist on the mission that located and recovered the sunken treasure, will be at the exhibit each day during the show to meet with visitors and present educational programs about the Ship of Gold.

“It’s hard to believe it has been 25 years since we first saw that sidewheel frame on the ocean floor, sending electricity through the control room as my crewmates exclaimed, ‘Oh! You know what that is! You know what that is! All right!’ Then, seeing the first glint of gold dust in the seafloor sediment under my microscope, finding and recovering the bell, and seeing the first pile of gold bars and coins,” Evans said. “It still seems new, like yesterday,” Evans recalled.

Evans said he relives those experiences through the reactions of collectors and other people who have witnessed the exhibit.

“I love to tell the stories, both those of the men and women of the Gold Rush, and my own experience with the treasure, which still speaks to me,” Evans said.

The ANA Road Show, a traveling display of items from the ANA Edward C. Rochette Money Museum and Dwight N. Manley Numismatic Library, will make its California debut at the expo.

The ANA Road Show will include two examples of the “King of U.S. Coins,” the Cohen Class I 1804 Draped Bust dollar and the Idler/Bebee Class III 1804 dollar.

None of the Draped Bust dollars dated 1804 were struck during that calendar year.

The Class I dollars were struck in 1834, and intended for inclusion in boxed presentation sets. The boxed sets were to be presented to foreign dignitaries in an effort to expand American trade in the Far East.

Although the 1804-dated dollars were not struck until 1834, the Class I dollar production was executed under the authority of the U.S. State Department and the U.S. Treasury Department.

All Class I examples bear a lettered edge.

The Cohen 1804 Class I Draped Bust dollar, to appear at Long Beach, includes collector Edward Cohen early in its pedigree of ownership. It is the only specimen of 1804 dollar worn from circulation.

The Cohen 1804 Draped Bust dollar was one of two 1804 dollars stolen in an Oct. 5, 1967, armed robbery at the Florida estate of Willis H. du Pont, during which masked gunmen held du Pont, his wife and children, and household servants at gunpoint while a safe containing the two 1804 dollars and other coins was ransacked.

The other stolen 1804 dollar from that 1967 robbery — the Linderman Class III coin — was recovered in 1981 when it was presented in person to the ANA Certification Service in Colorado Springs, Colo., for authentication. The submitter agreed to leave ?the coin, after which ANACS ?officials notified the FBI. That coin is named after one of its former owners, former U.S. Mint ?Director Henry R. Linderman.

The Class I 1804 dollar stolen from the duPonts in the 1967 robbery, the Cohen example, was recovered in 1993 in a sting assisted by ANA Executive Vice President Edward C. Rochette, who had also assisted in the 1981 coin recovery.

The sting resulted in the recovery of both the Cohen 1804 dollar and the unique 1850 Norris, Gregg & Norris pioneer gold $5 coin.

One of the two Israeli citizens arrested had in his possession the 1804 dollar and the 1850 Norris, Gregg & Norris pioneer gold $5 coin. The pioneer gold coin was also stolen in the 1967 armed robbery of the duPont family.

The Class II and Class III categories of 1804 Draped Bust dollars, often referred to as “first restrikes” and “second restrikes,” were not officially sanctioned by federal authority though they were struck at the Philadelphia Mint.

Class II and Class III 1804 dollars were struck sometime in the late 1850s as coin collecting was becoming a more popular pastime. Individuals at the Philadelphia Mint struck a number of coins, patterns and fantasy pieces for sale to collectors.

Only one Class II dollar is known. It is part of the National Numismatic Collection in the Smithsonian Institution.

The Class II 1804 dollar bears a plain edge and was struck over an 1857 Swiss shooting taler.

Of the Class III dollars, six examples are known, all with incuse edge lettering.

The Idler-Bebee Class III 1804 Draped Bust dollar from the ANA Money Museum that will be displayed at Long Beach last resided in the collection of Nebraska dealer Aubrey Bebee, who, along with his wife, Adeline, donated the coin to the ANA in 1991.

The Bebees purchased the coin in January 1985 for $302,000, in Superior Stamp & Coin Co.’s sale of the Dr. Jerry Buss Collection. Nineteenth century collector William Idler originally acquired the coin from the Philadelphia Mint.

The ANA exhibit will also include a selection of rare California national bank notes and California gold bank notes, and notable numismatic errors such as a 1937-D Indian Head Three-Legged Bison 5-cent coin and a 1955 Lincoln, Doubled Die Obverse cent.

Discount coupons and a schedule of events — including educational seminars, club meetings, and special coin and stamp collecting activities for children on Sept. 28 — are available online at www.LongBeachExpo.com.

Heritage Auctions of Dallas (www.ha.com) will conduct a public auction of rare coins and currency Sept. 25 to 29. ¦